Tupac Shakur- The Rose that Grew from Concrete 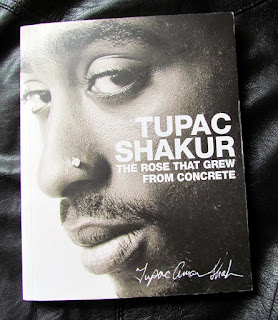 The Rose that Grew from Concrete was unexpected birthday gift from my younger sister's boyfriend, he's trying to educate me about conscious rap. Although I had heard of Tupac, I wasn't aware he was a poet. The poems in the collection are more insightful and political than I was expecting.

My sister's boyfriend had given me a brief introduction into the true meaning of' Thug Life' and Tupac's history and activism with the Black Panthers.  The poems are a refection on racism, empowerment and love.

In America you can take courses on Tupac's poetry and music and I think they'd be really interesting to attend. From an English Lit prospective, the poems would be fascinating to breakdown and look at the symbolism, syntax and influences.

One thing I noticed was Tupac's preoccupation with sight, seeing and blindness. The poems are introspective, Tupac looks at himself and society and the repetition of 'see' 'I' and 'sight' emphasise this. I really want to write/read a compassion of The Rose that Grew from Concrete  and The Great Gatsby. Both Tupac's poems and Fitzgerald's novel examine the gaze of society. Both Gatsby and Tupac are outsiders looking in, and they are in turn looked at and judged by mainstream American society.

"With my eyes closed I can c
we have a chance 2 discover ecstasy
but the clouds of doubt have made u blind"
- What I See! Tupac Shakur

One of my favourite poems was 'Black Woman', as it is the complete opposite of the misogyny often found in rap. The poem is a celebration of female empowerment. The male voice of the poem is not emasculated by the strong women. He praises her and acknowledges it is her endurance and strength that enriches their relationship.

If you are unfamiliar with Tupac or not a fan of rap, I still suggest you give The Rose that Grew for Concrete a try, it may surprise you. The collection give a reflective, inspiring and considerate insight into issues of racism and Black pride.