It took me over a month to read Roots, and consequently I have a rather mixed view about the book. It has some of the most evocative descriptions I have ever read concerning the slave trade and the middle passage, but also some incredibly dull parts about cockerel fighting that I had to skip over. 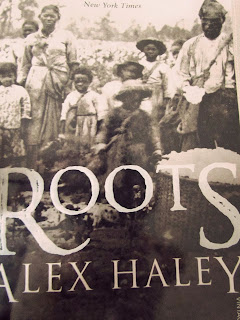 The Plot:  Alex Haley traces seven generations of his family history, from the capture and enslavement of his ancestor Kunta Kinte in 1767, through to the difficult lives of Kinte's descendants and their eventual emancipation. Roots took 10 years to research and won a special Pulitzer Prize in 1977.

The book is not without controversy, Alex Haley was accused of plagiarism, genealogists have disputed Haley's research and critiques have challenged the authenticity of Roots. (if you want to read more about the controversy see here) 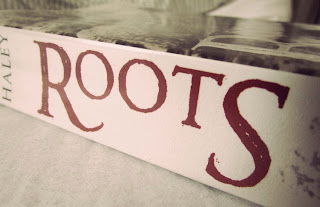 Disputes aside, the story of Kunta Kinte is an incredibly powerful narrative. He remains dignified and defiant throughout even the most difficult circumstances. The chapters concerning Kunta Kinte's childhood and upbringing are a pleasure to read, the inhabitants of Jufureh and village life are credibly retold. Kunta Kinte's fortitude is clearly a testimony to his upbringing.

Kunte Kinta's transportation to America makes for harrowing reading. I learnt about the slave trade in school, but history textbook don't manage to covey the horror as effectively as Roots. Alex Haley manages to invoke the sights, smells and sounds of the journey. Although I can never truly imagine the cruelty and abuse of the middle passageway, Haley's descriptions go a long way in exposing the inhumanity of the traders.

Though Roots is understandably a grim novel, there are plenty of moments of humour and tenderness. The interaction between family members and the sense of community between slaves is lovely and heart-warming. Like any family, there are some eccentrics in Kunta Kinte's descendants. Chicken George is roguish and bombastic, though I do think there are way to many stories about him training cockerels and attending bird fights.

The main bulk of Roots is taken up with recounting Kunta Kinte's story, which undoubtedly important, means that the stories about his descendants feel a bit hurried and sparse.

At the end of Roots Alex Haley briefly explains how he researched his family history. He relied heavily on oral history and family tales, and then tried to collaborate these tales with official documents. I would have liked to know more about his research, especially as there is controversy about this.

I would recommend Roots, it is an invaluable read for people interested in history, genealogy and the legacy of slavery. Although some parts are distressing, it is also a story of love, pride and hope.
Email ThisBlogThis!Share to TwitterShare to FacebookShare to Pinterest
Labels: African-American Literature, Alex Haley, book, Book covers, cross-generation, currently reading, family saga, history, paperback, review, slave narrative