The Gift of Rain is currently available of Kindle for £0.99, I strongly suggest you snap it up.

The plot: Set in Penang, Malaya, this novel spans decades, from the dying days of the Chinese imperial court, to the collapse of the British empire to Japanese hostilities in World War Two.

The protagonist is Philip Hutton, who feels alienated because his dual British and Chinese parentage, until he meets Hayato Endo.  Endo, a Japanese diplomat becomes Philip's friend and mentor, teaching him about Japanese culture and the martial art aikido.

With the outbreak of World War II, and Japan's brutal occupation of Penang, Philip comes to realise he has been betrayed by Endo, who is a Japanese spy. Philip becomes an unwitting traitor as he is forced to collaborate with the occupying forces in a hope to save his family. 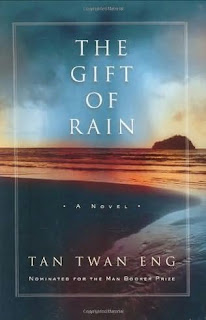 This novel is emotionally draining. Tan Twan Eng is a very talented writer, he made me sympathise with so many of the characters, but especially Philip, who's life is so tragic that I felt worn out by the time I'd finished reading. That's not to say it's not a good book- it's just very sad.

Wartime collaboration is a contentious issue, usually when people talk of collaborators it is negative. Collaborators are seen as weak, cowardly traitors that should be shamed and punished. The Gift of Rain, shows how love and loyalty can be manipulated, and how people believe they are doing the wrong thing but for the right reason. Though The Gift of Rain examines the morality of collaboration, it isn't preachy and it isn't simplified. Both Philip and Endo have their reason for assisting the Japanese with the invasion of Penang, there reason's are not presented as an excuse. They are not blameless just because they are coerced.

The scope of the novel is huge. I really enjoyed when the narrative broadened out, and included glimmers of Buddhist religion, Japanese philosophy and Chinese history and folk-tales. Penang sounds like a fascinating place, an interesting mix of different cultures, after reading this book I really want to visit.

Although I learnt about the Second World War in school, we mainly focused on the Western front, so I am woefully ignorant about the battles in south-east Asia. Before reading The Gift of Rain, I was unaware that Malaysia was a former British colony, that during the war had been shamefully left undefended when invaded by the Japanese army. It is something, that after reading this novel, I really want to educate myself on.

If you enjoyed this, I'd recommend Burnt Shadows, by Kamila Shamsie. As like The Gift of Rain, the novel depicts World War II in south-east Asia.
Email ThisBlogThis!Share to TwitterShare to FacebookShare to Pinterest
Labels: currently reading, historical fiction, kindle, Malaysia, Penang, review, Tan Twan Eng, The Gift of Rain, World War II