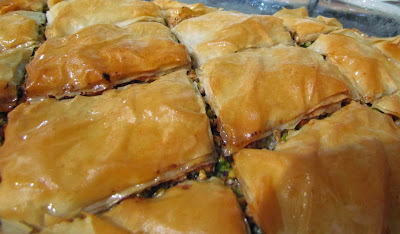 I'm going to a Christmas potluck party at the weekend, the theme is 'the true meaning of Christmas' so dishes are supposed to be middle-eastern in flavour. So, with this in mind, I decided to have a test-run of making Baklava. I loosely followed this recipe. 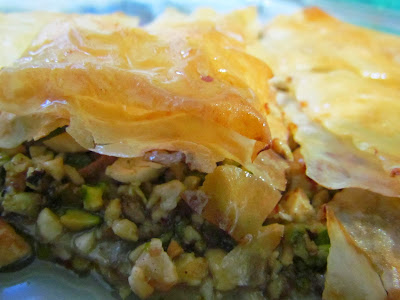 I did have to make some alterations to the recipe, partly out of necessity (I didn't have enough pistachio nuts, so had to substitute with  some walnuts and cashews) and also because quantity of sugar and butter seemed way to high. So when I had to brush butter on each sheet of filo pastry, I did so at stingily as possible.

I think I'm going to reduce the sugar content in the syrup even further (I halved it) as even though Baklava is supposed to be sweet, it's still to much. I've eaten the tiniest little diamond, and the resulting sugar high has me ready to crawl up walls and bounce of ceilings.

Also, if you're thinking of attempting this recipe, salted and roasted pistachio nuts work fine. I was slightly worried as the recipe calls for plain pistachios but I couldn't find any. This did mean I had to spend about half an hour shelling a bag of nuts, but I didn't in front of the tv so it wasn't any kind of hardship. I would say if you are using salted and roasted pistachios it is probably a good idea to make up the rest of the weight with another type of nut so the salt isn't overwhelming. 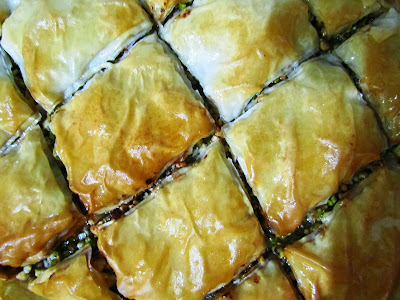