We've seen the majority of the National Trust properties in our area, so decided to go further afield to visit some new properties. Last week we took a mini-break to Derbyshire. 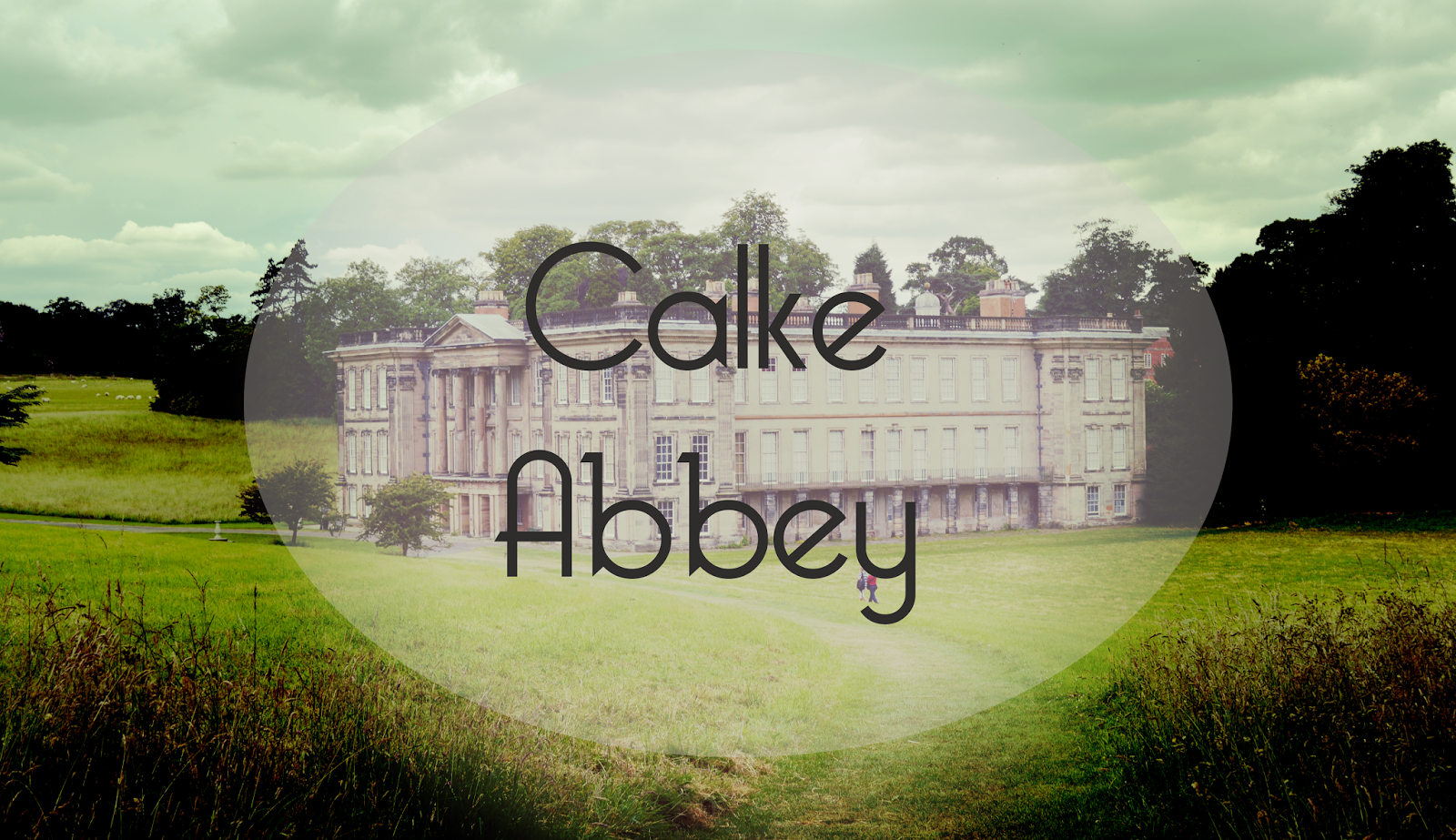 Calke Abbey, was one building on our itinerary, particularity as it is unique within the Trust as it has not been completely restored.  Calke Abbey, tells the story of decaying grandeur, of what happens when families fortunes decline and country estates are no longer affordable.
As we went on a Thursday, the house was only accessible by tour, which suited us fine, particularly as we were on the last of the day (3:00pm) and there was only us on it. Our tour guide, Marilyn, was an absolute sweetheart, and really enhanced our experience as she was so knowledge. She also made good use of oral history, a former maid and footman had been interviewed and recorded, and it was lovely to listen to them recount their stories. 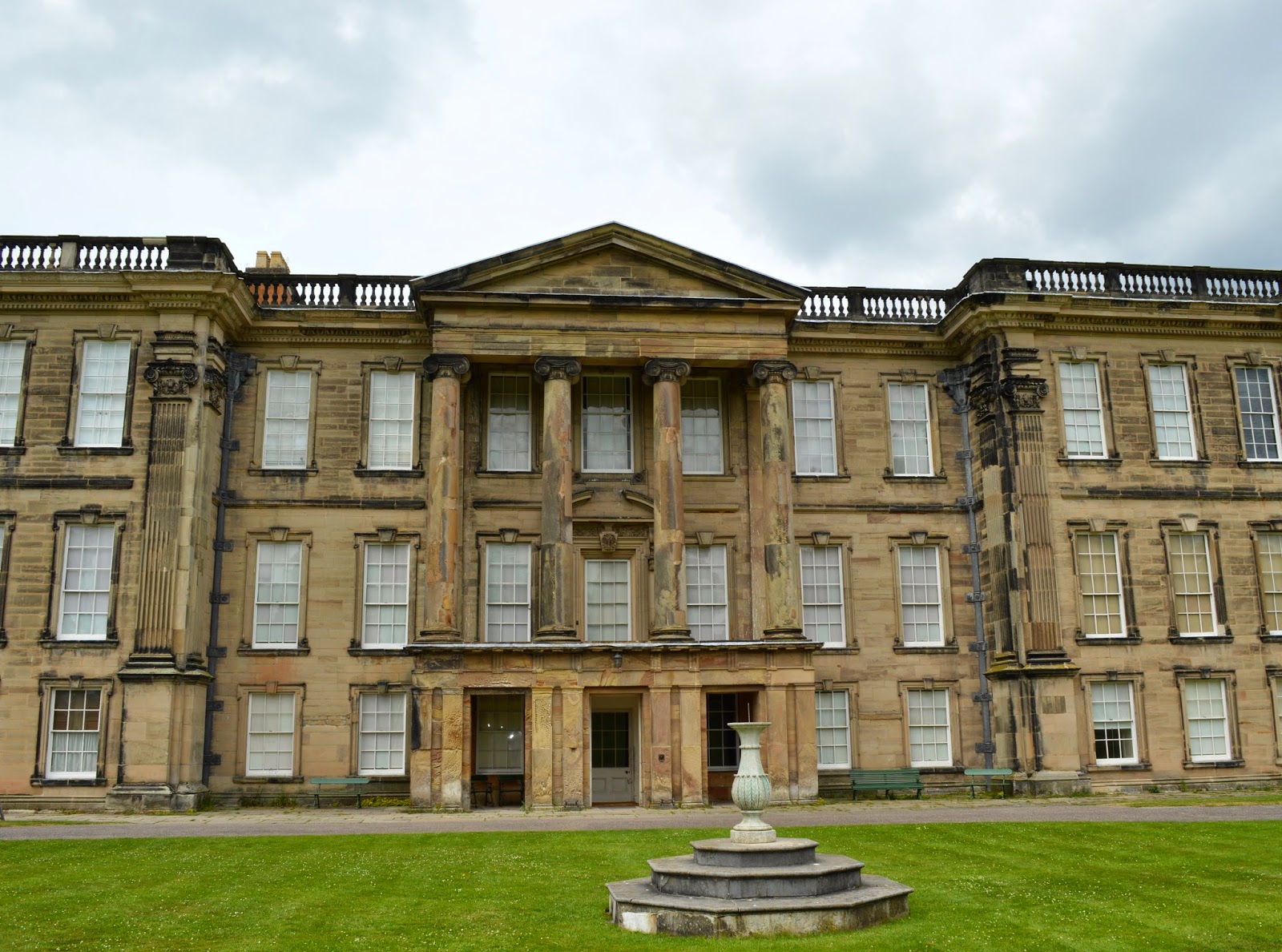 Calke Abbey is built on the site of an old priory, which was dissolved during the reign of Henry VII. The current baroque mansion was built between 1701-1704, by the Harpur family. Wanting to bolster their credentials, the house was named Calke Abbey, though this is a misnomer, as there has never been an abbey on this site. The Harpur family had a fair number of odd balls. Sir Henry was a loner, who secluded himself at Calke. He caused further scandal by marrying his mistress, Nanette Hawkins, a former lady's maid. Due to her low birth, Nanette was snubbed by polite society, which caused the couple to be further isolated. She must have been very lonely, and therefore took an unusually hands-on approach to raising her children. I think it's pretty commendable that Henry actually married Nanette, plenty of the elite produced illegitimate children and then abandoned them and their mothers.

Another Harpur eccentric was Sir Vauncy (10th baronet), he had a passion for stuffed animals and spent vast sums of money collecting them. He was also obsessed with shooting, and was only parted from his gun during the Sunday church service, when he would leave his gun propped up in the porch. Vauncy waged a vendetta against moles, and would leave hundreds of their corpses strung up on fences around the estate as a warning to others. He had a stained relationship with his family, and would only communicate with his daughter and staff through letter.

During the time of Vauncy's daughter, Hilda and her successor Charles, the estate was beset by financial difficulties. The war meant domestic servants were harder to come by, as men and women preferred the higher wages offered by factories. With less help available and astronomical death duties, a large house was impossible to maintain, so large parts of the house were closed off. It is easy to imagine Hilda as a Miss Havisham type figure, living alone in house that is gradually falling down around her.
These rooms  were not reopened until the National Trust was granted Calke in 1985. By that time disrepair and decay and taken hold, and the trust made the decision to leave the house as it was found, rather than do large scale renovation.
The gardens are in a similar state of disrepair and have been left just as they were found. Tools are still in the same place as they were dropped and first place certificates for gardening competitions are mildewing on walls. 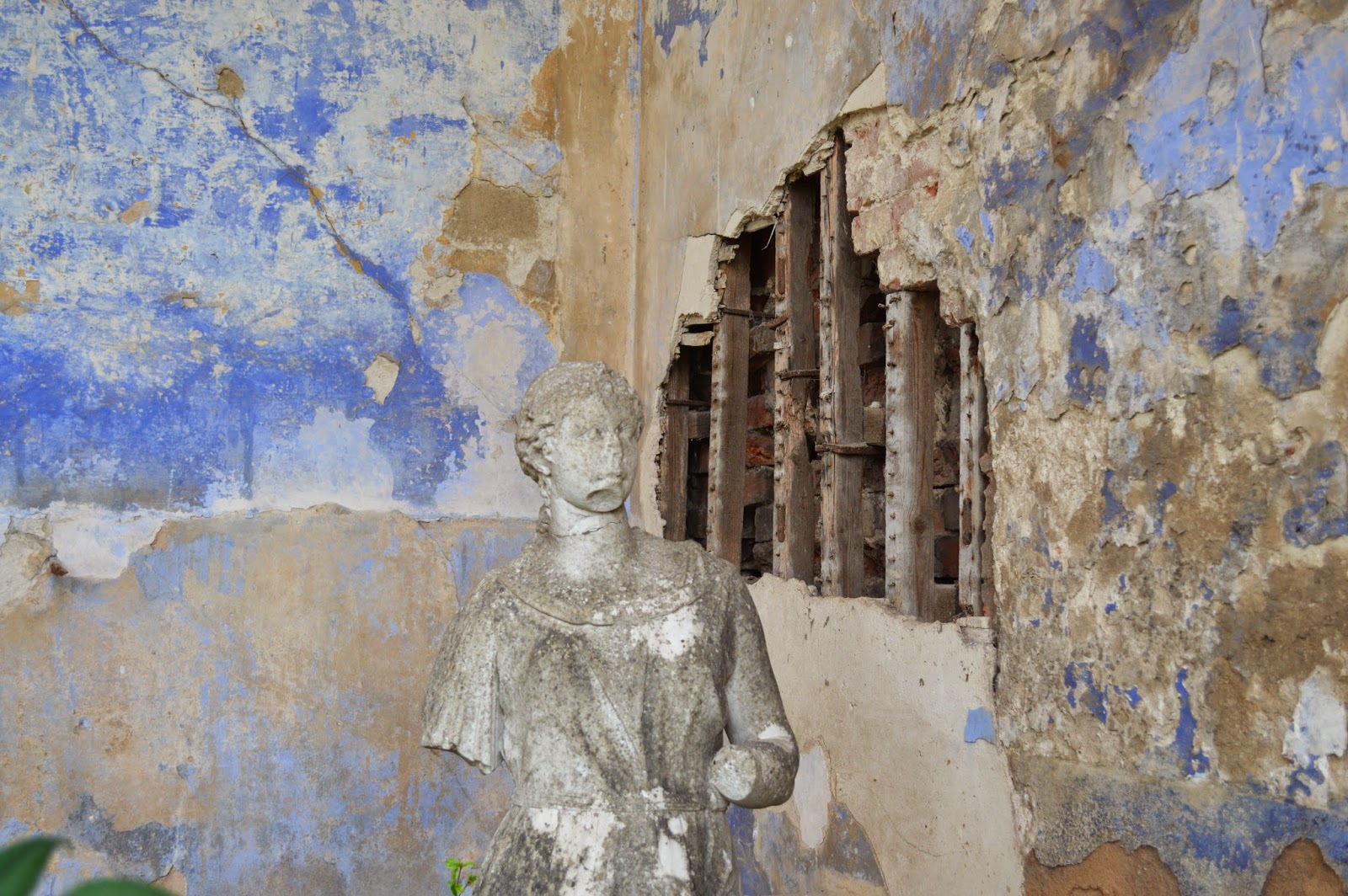 If you visit Calke, make sure to walk through the gardener's tunnel. It was built so the gardens could go through the grounds without disturbing the Harpur family. It's really dark and rather creepy. 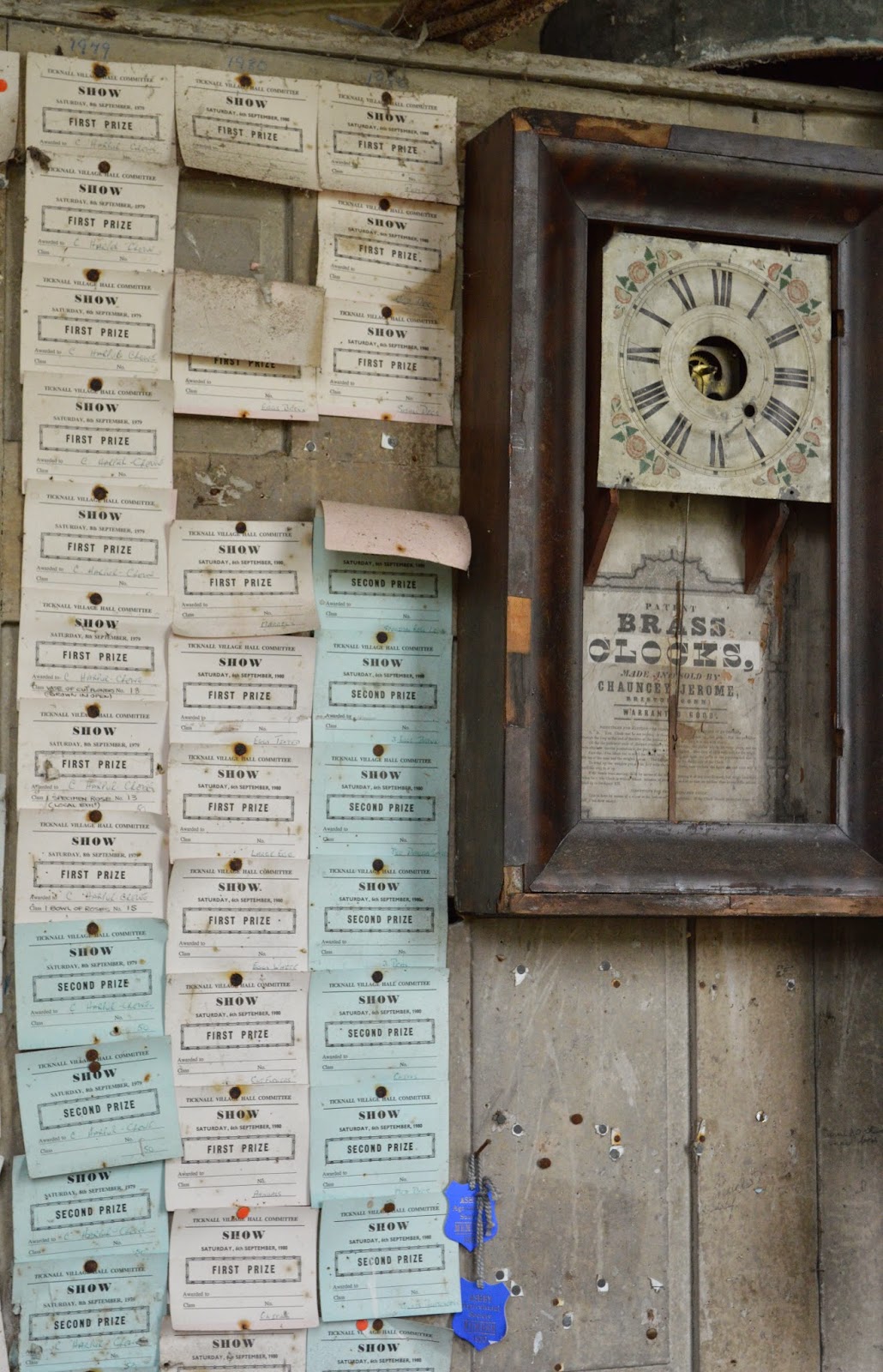 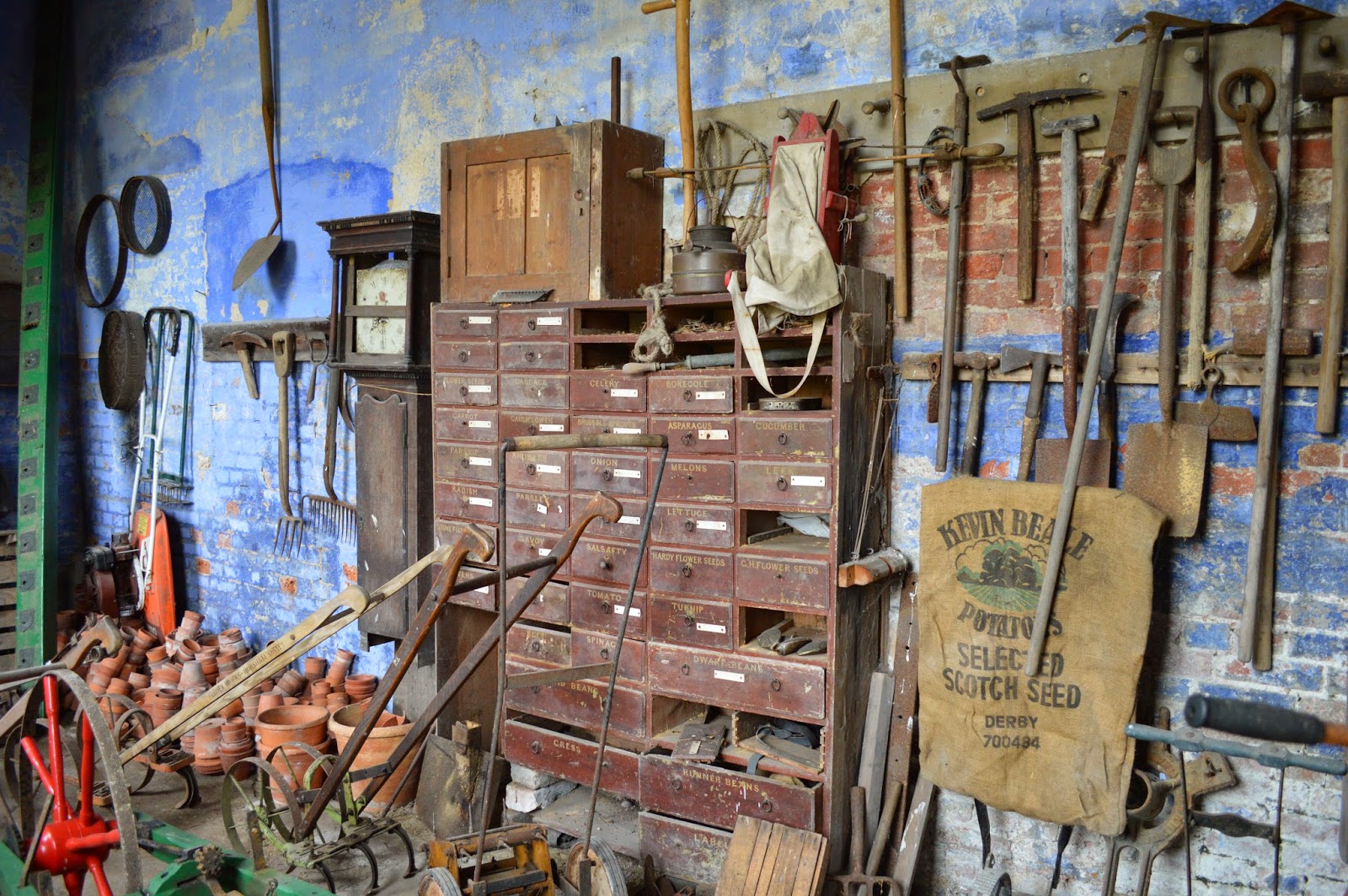 The contrast between Calke and renovated stately homes is stark. It is fascinating to see how much conservation comes into restoring these properties, and what happens if this work does not take place. Calke would be a fabulous place to make a horror film. There is something quite arresting about the deterioration and bygone wealth.

I know that all beneath the moon decays,
And what by mortals in this world is brought,
In Time’s great periods shall return to nought;
That fairest states have fatal nights and days
-William Drummond
Email ThisBlogThis!Share to TwitterShare to FacebookShare to Pinterest
Labels: Calke Abbey, day trip, decay, failed country estate, National Trust, photo, photography, preservation, renovation, visit