Helene Wecker, The Golem and the Djinni

I picked up The Golem and the Djinni for £1.99 after reading a sample at the start of this month.
The Plot: Chava is a golem, shaped from clay and brought to life by a rabbi, who dabbles in dark magic. When her master, dies whilst a ship bound New York, Chava is left purposeless and alone. Similarly forlorn is Ahmad, a being of fire, trapped for centuries in a copper flask. Once freed, he is still tethered to the physical world, by a band of iron and must, like Chava, try to survive in a strange, human world.

There were some aspects of this novel that I enjoyed. Golems are characters from Jewish folklore and djinni are supernatural spirits from Islamic and pre-Islamic Arabian mythology, so the author Helene Wecker, had an abundance of source material to take inspiration from. I was really interested in reading more about golems, djinni, Kabbalah and Jewish mysticism and Wecker did introduce me to customs and folklore that I was ignorant of.

However, Wrecker was also limited by mythology, a golem is created to serve and has no desires of it's own, this meant that Chava as a character was at times insipid. Though she expressed boredom and was contained due to circumstances (a woman can't wander 19thC New York at night without attracting the wrong attention) I was equally frustrated that she accepted these restrictions and self-imposed isolation. For me, Chava lacked gumption. Ahmad was equally limited, his iron enslavement meant that he was unable to shape-shift, fly, posses people or basically so anything that makes djinni's cool. Chava and Ahmad lacked magic and were therefore no different to other newly arrived immigrants, experiencing culture shock and loneliness. I think it was properly Wrecker's intention to create parallels between the experiences of Chava and Ahmad and ordinary people, but it meant that Chava and Ahmad difference couldn't flourish, they could have done to be more vibrant and outlandish. 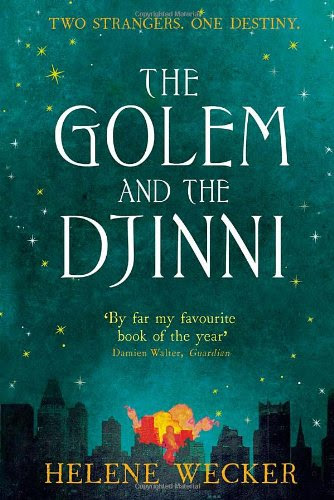 What Helene Wecker does do very well is create and atmospheric setting. The descriptions of 19th Century New York are vivid and encompassing. I really got a feel for the sights and sounds of the place, and the secondary character add to sense of industry and hope. Equally climatic are the descriptions of Ahmed's homeland, the desert and his castle are almost tangible.

I would say The Golem and the Djinni held my interest for about two-thirds of the novel, but towards the end it was bordering on slow and tedious. Character development was virtually non-existent and the narrative arch missed drama. However, for a début novel, it is not without promise and I would be interested in seeing what Helene Wecker produces in the future.