Another day, another jolly to an English Heritage site! Well, my membership cost £48 so I have to make the most. 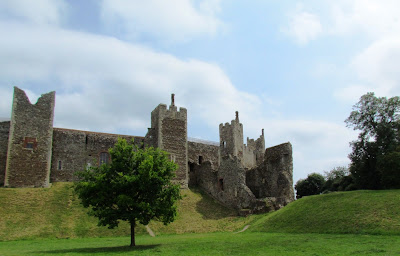 Framlingham castle  was built in the 12th century and has had an eventful past, it was a stronghold of the Howard family (relations to Anne Boleyn), it was where Mary Tudor raised her armies and declared herself Queen, and from 1636-1839 it was a poor house for destitute people.  The castle is now a ruin, but is still impressive. The self guided audio is informative, and necessary otherwise I would have just been looking at a pile of bricks with no concept of the history of the place.

Somebody actually lives in the former poor house inside the walls of castle. How awesome would that be! When all the visitors leave for the day you could go and sit on the battlements with a glass of wine and survey the beautiful surrounding countryside. It would be a fantistic place to grow up as well! The games you could play in an actual castle would be amazing.  Of course the downside is you have loads of tourists noseying your front window.

We also went to the nearby graveyard, as Thomas Howard (uncle to Anne Boleyn) and Henry Fitzroy (Henry VIII's bastard) are both buried there.


A word of advice if you're visiting Framlingham Castle- bring a pack up. The local pub didn't look very inspiring and most cafes are closed on a Sunday. We were prepared so were alright, though we did notice when we lifted up the picnic blanket we had squashed a rather large dog turd, have care where you sit down!
Email ThisBlogThis!Share to TwitterShare to FacebookShare to Pinterest
Labels: church, day trip, English Heritage, Framlingham Castle, graveyard, Mary Tudor, Thomas Howard, visit