I recently took a quick trip to Aspley House and nearby Wellington Arch, both are maintained by English Heritage, so as I member I had free entry. Aspley House, was former residence of Arthur Wellesley, the first Duke of Wellington. The arch commemorates the Duke's defeat of Napoleon.

Unfortunately I couldn't take any pictures inside the house, English Heritage are really stingy about that. Some of the House is off limits, as the descendants of the Duke still have private apartments inside.

The first thing that is noticeable about the interior of Aspley is, Napoleon seems to be the main inspiration of the décor, there are pictures and statues of him everywhere! There is a there is a two ton, naked statue of Napoleon dominating the hallway. According to the audio tour, the floor underneath the statue had to be specially reinforced with a brick column, and if the statue is moved just by a couple of inches it'll come crashing through the floor! It is seems very egotistical (and weird) to me to decorate your house with images of your defeated enemy.
Wellington was also a massive fan of the colour yellow. Apparently he demanded that the walls were hung with yellow skill wallpaper, against the advise of his architect who was worried that the gilded picture frames would clash. The architect had a point.


In addition to an audio tour we had a really good talk by a tour guide. It was only a second time she had done it, but she was funny and informative. One thing I learnt was about Wellington's unhappy marriage to Catherine. When Wellington first proposed, he was rejected by Catherine's farther, and had to wait six years before they were allowed to marry. The intervening period were unkind to Catherine, Wellington is reported to say "She has grown ugly, by Jove!" on their wedding day. Although they had little in common, the couple remained together for 20 years. 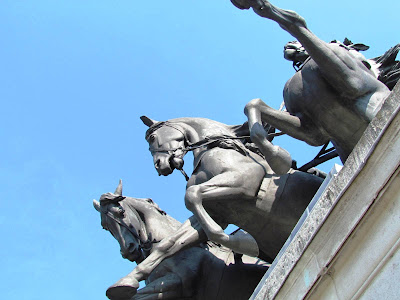 Although I enjoyed my jaunt to Aspley and Wellington Arch, I do think they're are over-priced. If you don't have English Heritage membership, you might want to skip these attractions. It costs £4.00 to get to the top of the arch, which doesn't sound like a lot, but we only spent about half an hour (if that) at the top. They view isn't exactly spectacular, you can only see a busy road and a bit of the park.
Email ThisBlogThis!Share to TwitterShare to FacebookShare to Pinterest
Labels: Arthur Wellesley, Aspley House, cenotaph, day trip, Duke of Wellington, English Heritage, London, Napoleon, photo, photography, tourist, visit, Welling Arch