Geraldine Brooks- People of the Book

I was at a loose end and didn't have anything to read, so I picked up my mum's copy of People of the Book. Mum usually goes for gossipy, family saga novels, so my expectations were pretty low, but it turned out People of the Book is rather an enjoyable read. 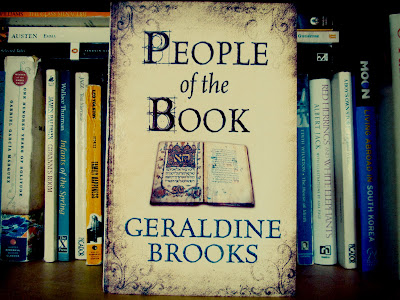 Plot: Hanna, an expect of rare books, has been tasked to conserve the priceless and unique Sarajevo Haggadah*. The previous owners of the book have left tiny traces of themselves between the pages, an insect wing, salt crystals, a wine stain and a white hair. It is through these artefacts Hanna is able to uncover the history of the book and the stories of the Jewish people.

* a Haggadah is a Jewish texts that is read at Passover and instructs people on the order of Passover Seder.

This is a fictionalised history of the Sarajevo Haggadah, though from what I've read the true history is equally fascinating. The manuscript was saved from the Nazis by a librarian who risked his life to smuggle it out of the country. It was then kept safe by a Muslim cleric.

My thoughts and a review of the book after the cut (may contain spoilers):-

I thought the premise of this books was very clever. There are two parallel narratives, Hanna's attempt to restore the manuscript and then chapters which revel the story of how the stains and fragments came to be inside the Haggadah.

Both narratives had there merits, before reading People of the Book I had no idea how complex bookbinding and restoration is, it is part science, part art.  The tales behind the stains cover a lot of historic ground, and are revealed in reverse order; from Jewish persecution and partisans in 1940's Sarajevo, to The Inquisition in Venice and Tarragona, to the creation of the Haggadah by a Muslim slave in Seville in 1480.

People of the Book attempts to give a condensed account of Jewish diaspora throughout history and does so with varying effect. Some of the chapters, such as the one about Seville, seem a little rushed. It's not easy to cram five centuries of history into 503 pages. That been said, People of the Book, does have a good pace to it, it is not bogged down with facts or the dry parts of history, after all, it is fiction.

I don't want to revel to much, but the ending is disappointing. Also, too much time is devoted to Hanna's personal dramas, I wasn't really interested in reading about the relationship she has with her mum and lovers. Though I can appreciate that these sub-plots have been included to make her character less two dimensional.

Another small criticism I have is that the Geraldine Brooks is not very subtle about her message, The People of the Book does include a fair bit of moralising about inter-faith cooperation. While this undoubtedly an honourable intention, it can make the book slightly preachy and obvious.

I would recommend People of the Book, particularly if you're interested in Jewish history and/or have been enjoying the wonderful BBC Simon Schama series, The Story of the Jews.