Following from this post, here's a sneaky peak at the inside of Waddesdon Manor:-

As Baron Ferdinand de Rothschild built the manor to house his art collection, there's a lot going on. Priceless art and furniture fill every room, the affect can be a bit chaotic at times.
The writing desk at the foreground of this picture belonged to Marie Antoinette, which to be honest, I overlooked when I first went in the room. The Baron bought many items that belonged to the former French royal family, throughout the house you can see the emblem of the sun king. 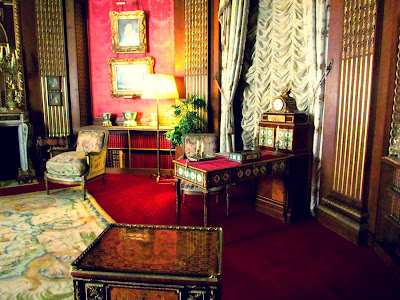 The Rothschild foundation are still very much involved in the running and upkeep of Waddesdon manor. Personally, I think that this is lovely, the family are obviously keen to share their collections with the nation and that is very commendable. Alice de Rothschild had very strict house rules, as she was determined to preserve the art and house for future generations.
The Rothschild family are keen to promote contemporary artists. One of the current exhibitions is 'folded beauty' by  Joan Sallas. Elaborately folded napkins and linen appear around the manor. There is also some light installations by Bruce Munroe in the former Coach House. 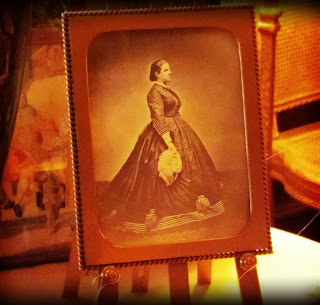 more pictures (and some risqué art) after the cut:-

There is a collection of over 300 paintings at Waddesdon. In one room we were told the painting by English and Dutch masters were valued at over £100 million. Many were acquired when the English nobility fell on hard times and the Rothschild bought them from friends.

Jeff, a brilliant steward really made the trip for me. He was about 4 foot 5, very elderly and an absolute encyclopaedia of knowledge. He kept appearing under my nose to tell me interesting facts, it was clear he loves his job and his enthusiasm was infectious. Jeff took me all around the room explaining all the iconography of the paintings.


The Tête-á-Tête was one of my favourites, it's not just a nice painting of a music lesson- it's actually quite racy! The Lute is an emblem of lust and lasciviousness. The gentleman in the foreground has his stockings partially rolled down- indicating he's just been doing the nasty. So, the iconography of the painting suggests, the figures are a prostitute, her client and her pimp in the background.

If you are planing a trip to Waddesdon Manor, there are two restaurants for you to enjoy. We ate at the more informal Stables Cafe, the food was excellent and there was a good choice.

Waddesdon Manor is one of the best National Trust visits I've been to, thank in a large part to the lovely volunteers and staff. If you're knowledge about art, or have interest in architecture and gardens you're in for a fantastic day out. Say hello to Jeff for me!