As promised - I've managed to finish one of my draft posts, sorry for being such a flaky blogger.

I read Valley of the Dolls last month but I thought it made sense to review it alongside Sinners as they are both similar. 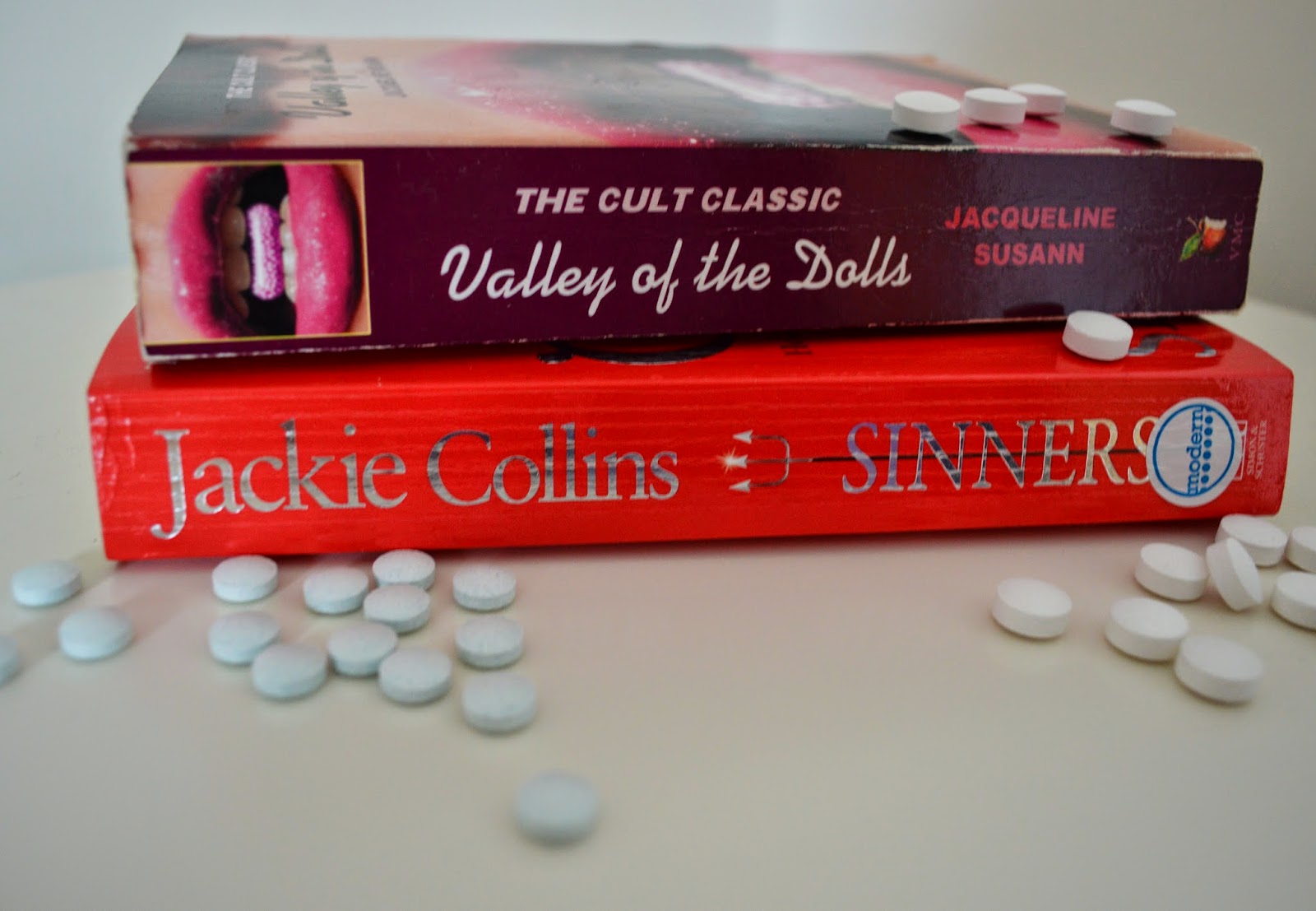 The Plot (Valley of the Dolls) Anne, Neely and Jennifer are young and beautiful and trying to make it in the entertainment industry, Anne as a model, Neely as a singer and Jennifer as an actress. They become friends, when they are naive and idealistic, but the depravity of Hollywood begins to effect their relationships, appearance and self-worth. The higher they climb, the more they sacrifice.

The Plot (Sinners) Sunday Simmons is on her way to stardom, but she is struggling the maintain her integrity, as directors push her into performing nude scenes. Charlie is a leading man, featuring in popular comedies, but his private life is a mess; his ex-wife is remarrying, so distract himself he is sleeping with multiple wannabe actresses. Herbert is a chauffeur to the stars, he also likes to send them anonymous explicit post and has started to target Sunday.

Rating: Valley of the Dolls, 4/5. Sinners 2.5/5
As indicated by my ratings, Valley of the Dolls is, for me, the superior book. It is such perfect trash.
Published in 1966 it has rightly become a cult classic, and one of the best-selling books of all time. It was also a trend setter, leading the way for authors, such as Jackie Collins, to write other novels about the dark side of the entertainment industry. Valley of the Dolls was also ground-breaking in its obscenity, as it includes substance abuse, sex, lesbianism, abortions and mental illness. In comparison Sinners is rather tired and unoriginal. It gave me the impression that Jackie Collins quickly bashes these sorts of books out and then cashes the cheque.

Another way in which Valley of the Dolls is the stronger novel, is that it has greater character arcs. Sunday Simmons remains much the same from the start of the novel to end,  a vulnerable, idealistic romantic. The only part where I warmed to her, and where she showed any backbone was when she refused to do a nude scene and walked off the set until she received a public apology. I can imagine many upcoming actors have to  sacrifice their integrity in so not to jeopardise their career, so this exchange was quite uplifting. Shame Sunday wimps out later on. In comparison Anna and Neely become more and more ruthless, shallow and unpleasant. Completely transforming from the loyal and  idealistic young girls they were in the beginning. The corrupting and back-stabbing nature of Hollywood is more clearly portrayed in Valley of the Dolls. 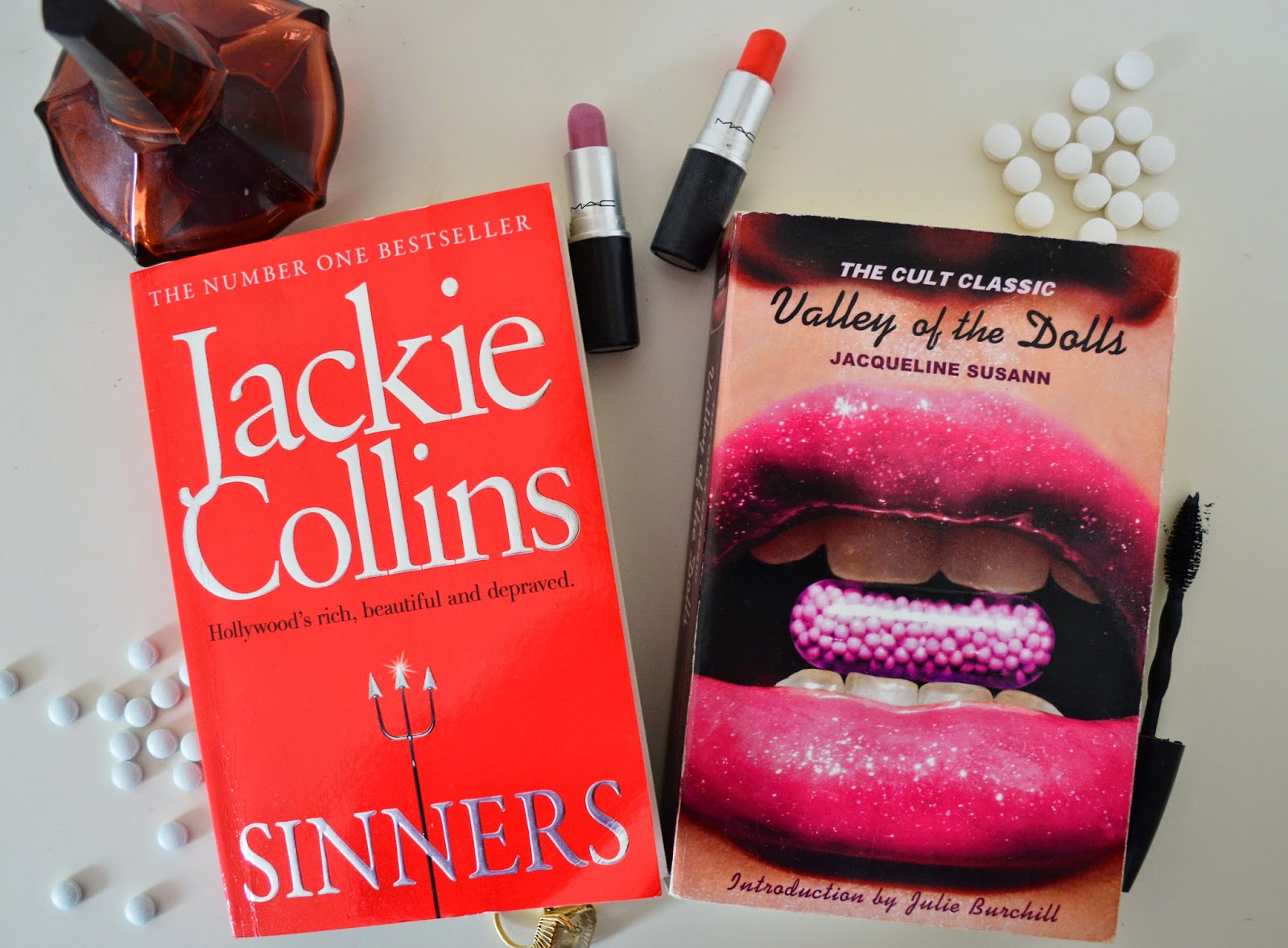 Of course, both books are completely sensationalist, and they could be complete fabrications of what the entertainment industry is like, but such is the enduring influence of Valley of the Dolls it has completely shaped how many people, including myself, perceive Hollywood. Plus, Jacqueline Susann was an aspiring actress, so I presume the novel was based on her experiences.

On a purely superficial note- Valley of the Dolls cover art is just fabulous. Sinners has a generic cover, for a generic book- explains it all really.

I enjoyed reading both novels immensely, but their kind of like sweets, perfect for a treat, but too many and you soon get sick of them. They are brilliant escapism, but Sinners in particular, has no real literary merit. I doubt I'll be picking up any more Jackie Collins, as I suspect that if you've read one you've read them all, as it was so formulaic. However, I might just have to pick up some more Jacqueline Susann novels.