By seeing London, I have seen as much of life as the world can show - Samuel Johnson

It is easy to forget how much history and beautiful architecture London has when you see it everyday, so I grabbed my camera and had a stroll around some of the main tourist destinations in the city.
Boudicca is a heroine of mine, ever since I went on a school trip to Colchester Castle. She was Queen of the Iceni tribe and led an uprising against the occupying Roman empire. She created such chaos that archaeologists are still finding evidence of burnt buildings and artefacts from when she set the city alight in AD60. 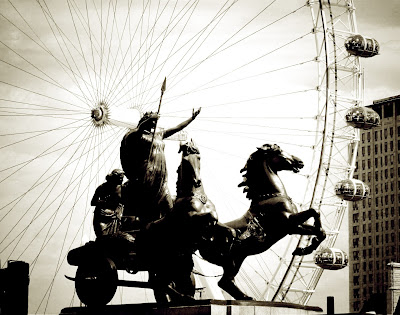 Everyone was getting their pictures taken with this stature of Nelson Mandela- the other political figures were really neglected.
The queues for Westminster Abbey were actually ridiculous, so we decided not go in, which on reflection was a bit of a shame. It would have been cool to see poets corner, where loads of of notable figures are either buried or have memorials. I  would have also like to see the Elizabeth I's grave, I'm not a royalist in the slightest, but Elizabeth I is another one of my heroines.

We did manage to get into part of the Abbey though, as members of the English Heritage we got to see the Chapter House and Pyx Chamber. 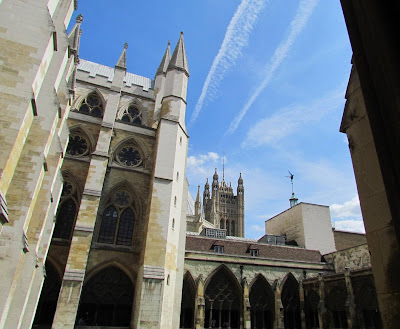 After having a wander around Westminster we jumped on the tube and headed to Trafalgar square and the National Portrait Gallery. At the gallery we ended up having a bicker with a man in a beret, as we thought that some of Van Gogh was overrated. I really dislike pretentious people, beret bloke was very dismissive as we hadn't studied History of Art- just because people don't have academic qualifications it doesn't mean that people's opinions or preferences aren't valid!