The Goldfinch and The Cuckoo's Calling

Aside from both having birds in the title, Donna Tartt's The Goldfinch and Robert Gailbraith's The Cuckoo's Calling have other similarities, so I've therefore decided to lump my review of them together.

The plot in a sentence:
Donna Tarrt, The Goldfinch: On the cusp of adulthood, Theo Decker loses his mother, but gains a painting by  the Dutch master, Carel Fabritius.
Robert Gailbraith, The Cuckoo's Calling: When famous supermodel Lulu Laundry suddenly dies, private detective and former solider, Cormonron Strike is hired by the model's grieving brother to investigate her death. Both novels were highly anticipated, The Goldfinch is Tartt's first book in 11 years, and Gailbraith is a pseudonym for J.K Rowling (possibly worst kept secret ever). So the first question is did they live up to hype? In a word, yes.

Although Donna Tartt's bibliography is small, but they are all contemporary classics, and beautifully written. The Goldfinch is no exception, populated by Tartt's usual cast of intellectual eccentrics and charming wastrels.   The Cuckoo's Calling is a more confident and accomplished novel than Rowling's first post-Harry offering, The Casual Vacancy, writing under an alias was obviously liberating.  Crime thrillers are also a genre that suits J.Ks style and ability write tightly plotted narratives. The characters seemed more believable than in The Casual Vacancy, were they occasionally tipped into charactertures.  Cormonran Strike, despite is ludicrous name, is a likeable character, who offers competition to other fictional maverick  detective such as Lee Child's Jack Reacher. 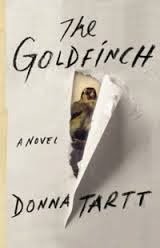 If you are thinking of buying either of these novels, I'd recommend you purchase the ebook version. As both are long and heavy. Plus I think they are both currently cheaper to buy on amazon kindle, I bought mine for £1.99, though I suspect the price has now gone up.

If you are trying to chose between the two, I think The Goldfinch is the better and more memorable read. I've read some unfavourable reviews of The Goldfinch on amazon (and some good ones) and feel I should defend the book. Yes, it is long, sometimes slow and Tartt will sometimes use pages and pages of description to arrive at a singular point , but that's what I loved about the book. You can see the care and consideration, the story revolves around the theft of a painting and Donna Tarrt uses words as brush strokes to craft a masterpiece of storytelling. She writes how I wish I could. The Goldfinch is one of those book that's more about the journey than the destination, perfect for curling up and reading at a leisurely pace. A novel that should be read, savoured and enjoyed rather that hurried through on the commute when your mind is elsewhere. If you're after something less challenging and faster paced, give The Cuckoo's Calling a chance instead.