If you live in England, and have either looked out the window or been on facebook you’ll have undoubtedly noticed it’s snowing. So here is a weather-appropriate review of Eowyn Ivey’s The Snow Child. 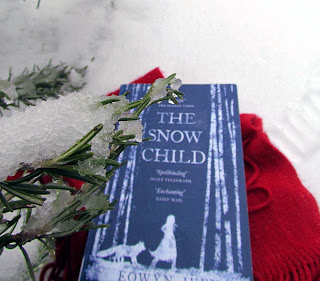 The Plot: Alaska in the 1920’s is wild and desolate, winters are harsh and lives are difficult. Jack and Mabel have come to this barren place to stake their financial and emotional wellbeing on an isolated homestead. Mabel cannot forget the baby she lost some years previously, and when a young girl, Faina, appears on their land, the maternal instinct she feels towards this unusual child is overwhelming.

Inspired by Arthur Ransome’s retelling of a Russian folktale Little Daughter of the Snow, Eowyn Ivey’s retains an ethereal fairytale feeling. There is something ‘other’ about Fain, she is mysterious and it is ambiguous whether she is a fairytale snow maiden as Mabel believes, or a half-feral orphan.

The landscape is a hugely important to the novel, and the imagery is vivid. Rural Alaska is bleak and harsh, it amplifies the loneliness Mabel feels, and the barren land is symbolic of her childless situation. Mabel’s sadness and vulnerability is sensitively written and her possessiveness toward Fain is understandable.

Parental and maternal bonds are a key theme of The Snow Child. The consequences of the death of Mabel and Jack’s child are keenly felt. They are both terrified that they will lose another child, so the love they give Fain is suffocating and restricting. 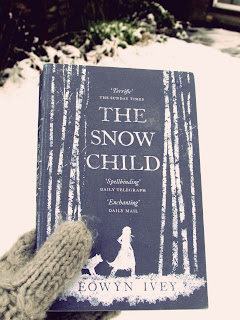 Fain remains just as enigmatic to the reader as she is to her adoptive parents. Some readers may find this frustrating, but I thought it was essential to her character that her past and motivation remain unknown. To be in keeping with fairytale tradition there needs to be an element of the uncanny. Fairytales are often dark and foreboding, and so is The Snow Child.

The Snow Child is enchanting, and, on a day like today, an atmospheric read.
Email ThisBlogThis!Share to TwitterShare to FacebookShare to Pinterest
Labels: Eowyn Ivey, review, snow, The Snow Child