Today we visited The British Museum and Mildred's, a small vegetarian restaurant in Soho. 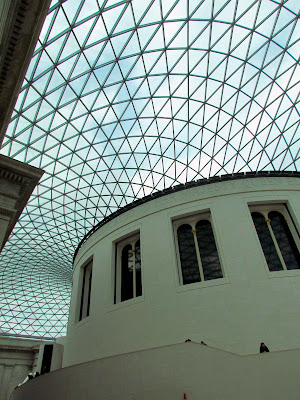 Ok admittedly, this post has little to do with books or cuppas, though in my defense we did drink tea and there was a library in the museum.

Mildred's has a decent sized menu of tasty vegetarian and vegan meals. There are also a few gluten-free goodies to choose from. The food is multicultural, dishes include Sri Lankan curry and a veggie take on traditionally British bangers and mash. It's testimony to the popularity of the restaurant that there was a queue going out the door. The only downside was that it was very crowded, so we were sat rather too close to other diners.


The meze was my choice. The feta dip was my favorite definitely something that I'm going to try and recreate at home. It had a creamy texture and was nicely spiced. The spanakopita was slightly greasy, but it was a minor fault.

The best exhibition in the British Museum is on ancient Egypt. I've been reading The Literature of the Ancient Egyptians (freebie kindle download) so was really keen to have a look round.

We managed to time it right and went on a free tour. The guide was obviously knowledgeable and she gave a brief introduction to variants in art and burial rites throughout the different dynasties.

The library had a satisfyingly musty smell. It's not the best place to read, as it gets quite crowded. There are a couple of places where you could squirrel yourself away and read, I spotted a few people enjoying a book in the Great Court and there is a reading room somewhere.