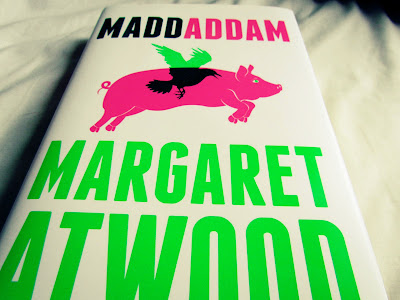 As I mentioned here I'm a big Atwood fan. Her dry wit, clever word play and vivid imagination all appeal to me. Plus she's a feminist hero and an environmental activist.

MaddAddam is the third in Atwood's apocalyptic trilogy is is preceded by Oryx and Crake and The Year of the Flood. A man-made plague has wiped out most of humanity, but a small groups of survivors remain; the genetically manufactured Crackers, members of an eco-cult God's Gardeners, and vicious criminals known as Painballers. Genetically spliced animals roam the remnants of human civilisation, including Pigoons, pigs with implanted human stem cells.

In  Oryx and Crake, the story is told from the point of view of privileged compounds, which is controlled by the powerful and sinister CorpSeCorps (Corporation Security Corps). Set in the pleblands, a lawless area outside the jurisdiction of the CorpSeCorps, The Year of The Flood, introduces the God's Gardeners, a political religious cult with a growing following.  MaddAddam, ties the two previous novels together, expanding on why the plague, known as the 'waterless flood' occurred and the consequences of armageddon.

If you like dystopian/ apocalyptic fiction such as Cormac McCarthy's The Road or films such as Children of Men, give this series a try.

I really recommend this trilogy, and I don't want to give a way any spoilers, so my opinions about MaddAddam are under the cut.


Ok, now I've espoused the virtues of this series, there is a small downside MaddAddam is the more disapointing of the trio. That's not to say it's a bad book! Margaret Atwood on a bad day can still write literature that wipes the floor with other authors.

I think part of problem was that I had such high expectations, but I dislike what's been done with my favourite character from the series, Toby. Toby in The Year of Flood, is tough, single-minded, fair, independent and though slightly reserved, still compassionate. Basically, if a natural disaster happened she is the kind of woman I would want to be or have in my corner. In MaddAddam her role has been reduced to that of girlfriend, she is conduit through which the Zeb's backstory  is told, she forlornly waits for him and is jealous of other women. Sparks of the old Toby do remain, she become a maternal figure and a teacher to the innocent Crackers.

The other women in this novel don't come across very well either, they are victims (Ren & Amanda) or conniving sexual predators (Swift Fox). Come on Atwood, as the author of some seminal feminist fiction I expected better! 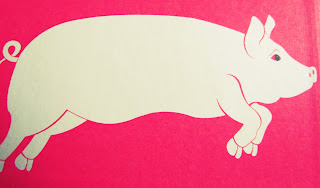 Gripes aside I really enjoyed this novel, and there were aspects that I loved. Toby's interaction with the Crackers, explored the way in which stories are told, myths are created and how religion develops. I liked the alliance between the God's Gardens and the Pigoons, as it raised questions about the definition of human and humanity. MaddAddam  does give a lot of food for thought, it is interesting to speculate how or if society could rebuild itself after near total devastation.

Also as a fan of the previous two novels- this book did answer some of my questions. The pre and post plague that Atwood was created and expanded through the trilogy is so credible and involved, all the books are engrossing and really complement and enhance each other.

I think I need to go back and re-read MaddAddam when I have the time, I feel like I haven't quite got under the skin of it yet.
Email ThisBlogThis!Share to TwitterShare to FacebookShare to Pinterest
Labels: book, Book covers, dystopian fiction, feminist, literature, Maddaddam, Margaret Atwood, Oryx and Crake, plague, review, The Year of the Flood