Picked up for an absolute steal at Hylands House, I intended to read Filth on my journey to Edinburgh, but didn't get round to it. I've read a few of Irvine Welsh's novels, (click for my review of Skagboys) so I knew what I was in for, but I must admit I did find this novel a bit much. 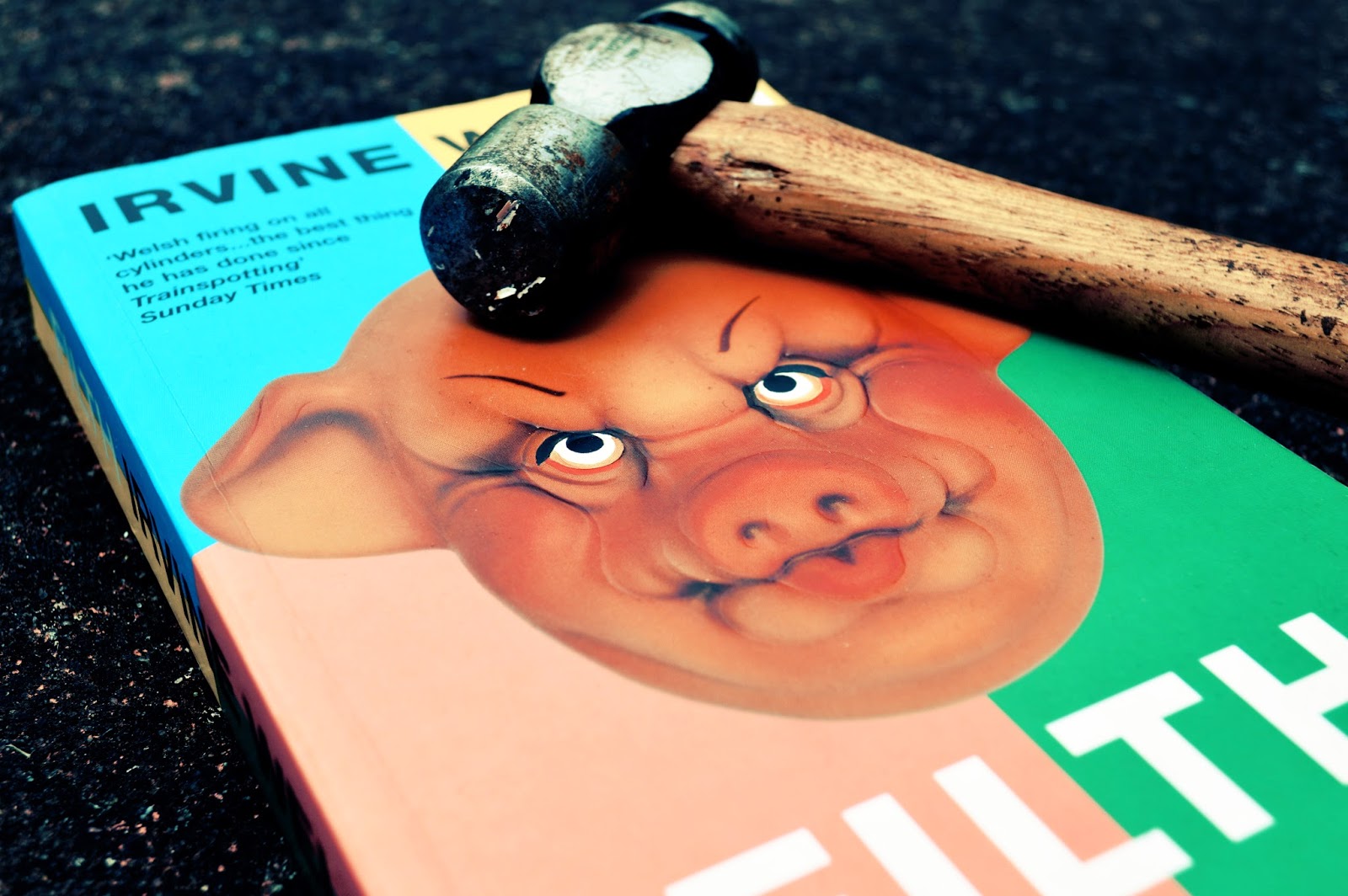 The Plot: When the body of a young black man is discovered on the Playfair stairs in Edinburgh, it is the duty of Detective Sergeant Bruce Robertson to investigate. Bruce is a thoroughly unpleasant man and a corrupt officer.  Racist and violent Bruce's main concerns are his upcoming trip to Amsterdam and his schemes to secure a promotion rather than justice for the deceased. 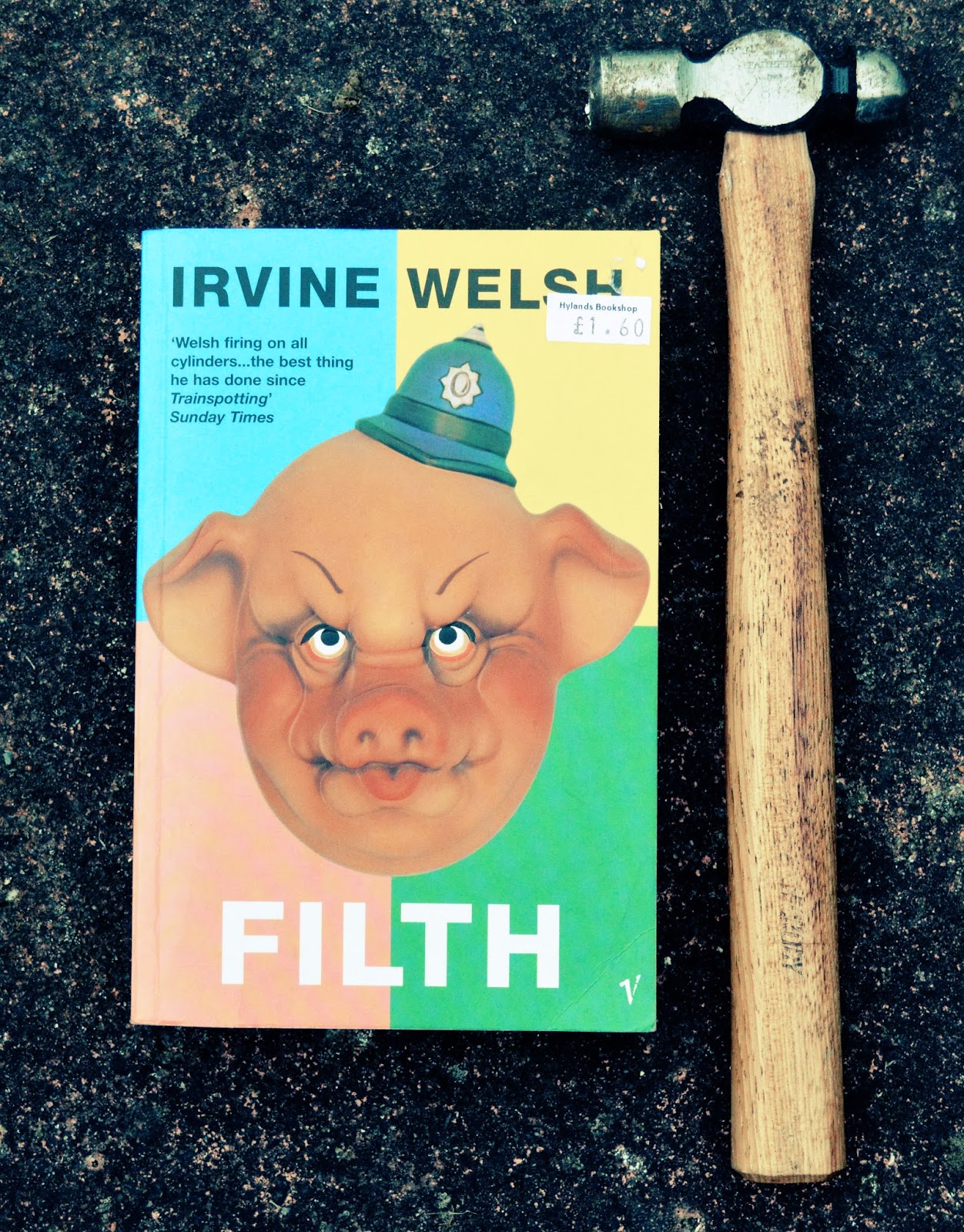 The writing style is experimental, it includes a narrating tapeworm, and Welsh is also trying experimenting with conventions of decency.  Now, I have a pretty high-tolerance for foul language, smut and violence when I read, but I did find this novel pushed the boundaries of what I find acceptable. The swearing didn't really bother me, but the racist slurs did. I know it was in some parts necessary, Bruce is a racist and the police is also institutionally racist, but at time is felt gratuitous. So definitely don't read this book if you find that kind of thing offensive or triggering.

It terms of being a crime/detective story Filth doesn't really fit in that genre, it is about the attitudes and prejudices of those doing the investigating, rather than the investigation itself. Still, I didn't guess who had committed the murder until I was told.


Back to the narrating tapeworm- hmmmmm, I really could't make up my mind how I felt about this. Part of me things it is clever and innovative, and I can't think of many authors who would have the balls to try and write from a parasites perspective....but then again it started to get on my nerves. The tapeworm can be slightly distracting at times, at its attempts to psychoanalyse Bruce seemed cliché.

Personally, I would have preferred it if Bruce didn't have a tragic back-story and possibly a biological predisposition for violence, it seemed a too simple explanation and an attempt to justify his behaviour. Some people are just horrid, their actions are without reason, and I think it fits in more with the rest of the book for Bruce to be a straight up sociopath.

My gripes about the tapeworm aside, I do want to watch the film adaptation of the book and I'm most interested to see how they tackle the tapeworm- I hope it's not just a voice-over.

Filth did have an impact on me, when I finished I immediately had to recount what I'd read to a friend (who's reaction was "wtf have you been reading"), but I'm not sure I'd pick it up and read it again, as I was disgusted most of the time. Bruce is absolutely vile, and I don't really want to spend any more time in his head (or guts). It's a really scary thought to think that people like him probably exist on the police force. Though he is an extreme character, he is also worryingly credible.