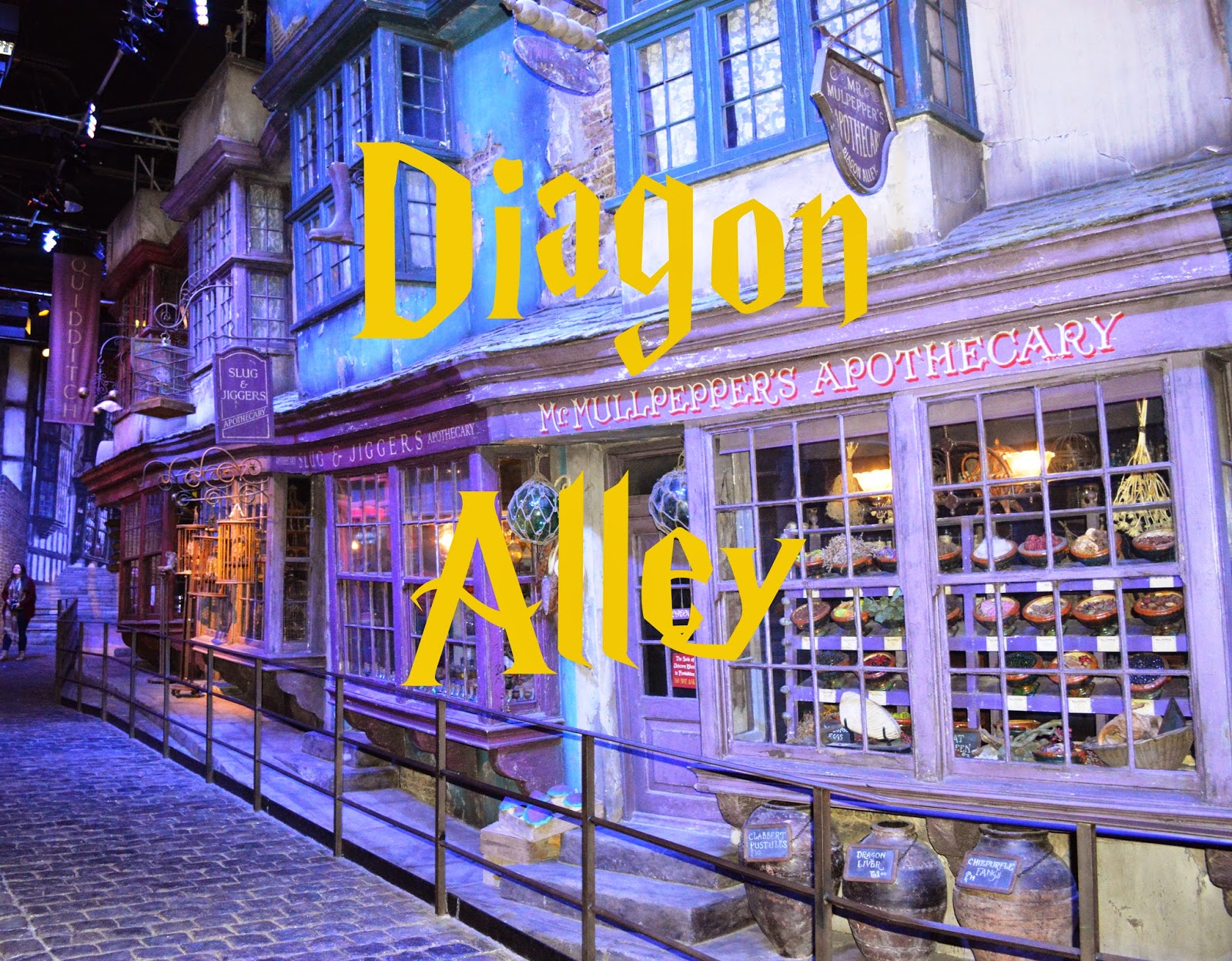 'Hagrid, meanwhile, was counting bricks in the wall above the dustbin. "Three up...two across..." he muttered. "Right, stand back, Harry.' He tapped the wall three times with the point of his umbrella. '
- Harry Potter and the Philosopher's Stone, J.K Rowling


Diagon Alley is an incredibly impressive set, when I saw it on the film I assumed it was filmed on a location like The Shambles in York (The Shambles are fantastic, narrow alleyways full of timber-framed shops). Although some of exterior shots were taken in real locations, a street with shop fronts was also specially created. 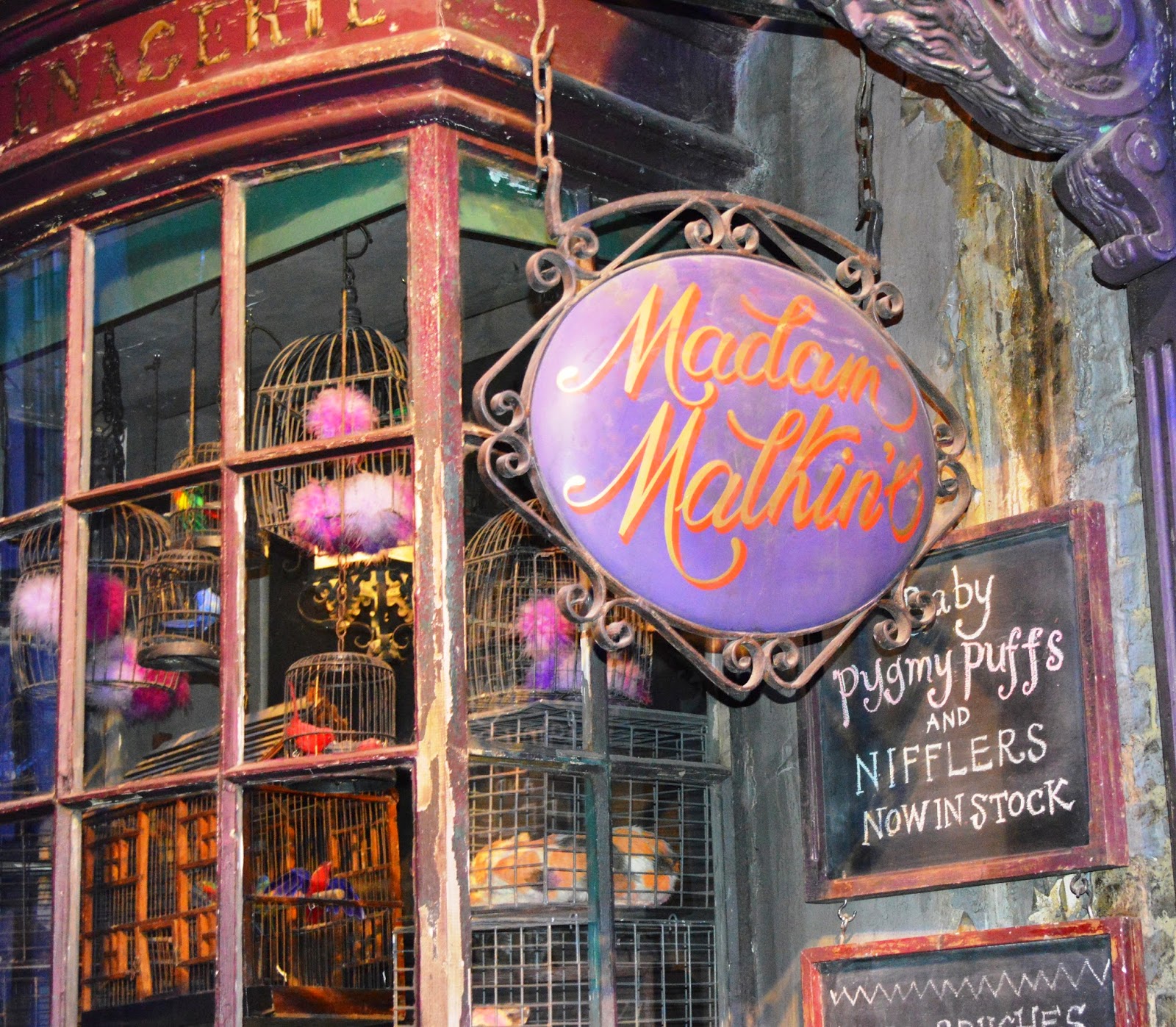 'They bought Harry's school books in a shop called Flourish and Blotts where the shelves were stacked to the celling with books as large as paving stones bound in leather; books the size of postage stamps in covers of silk; books full of peculiar symbols and a few book in them at all.' 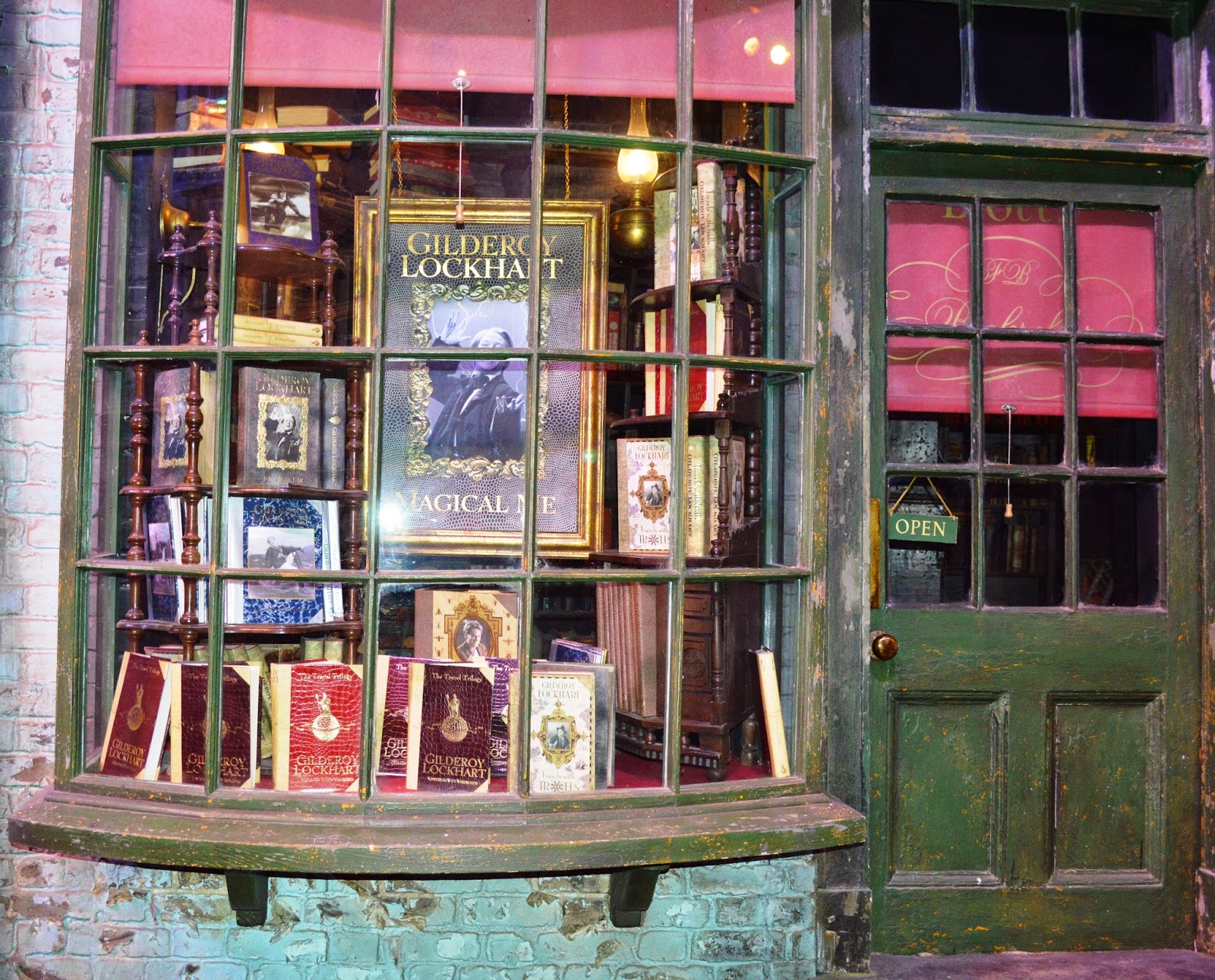 Predictably, Flourish and Blotts is the shop I'd like to have a browse in the most. 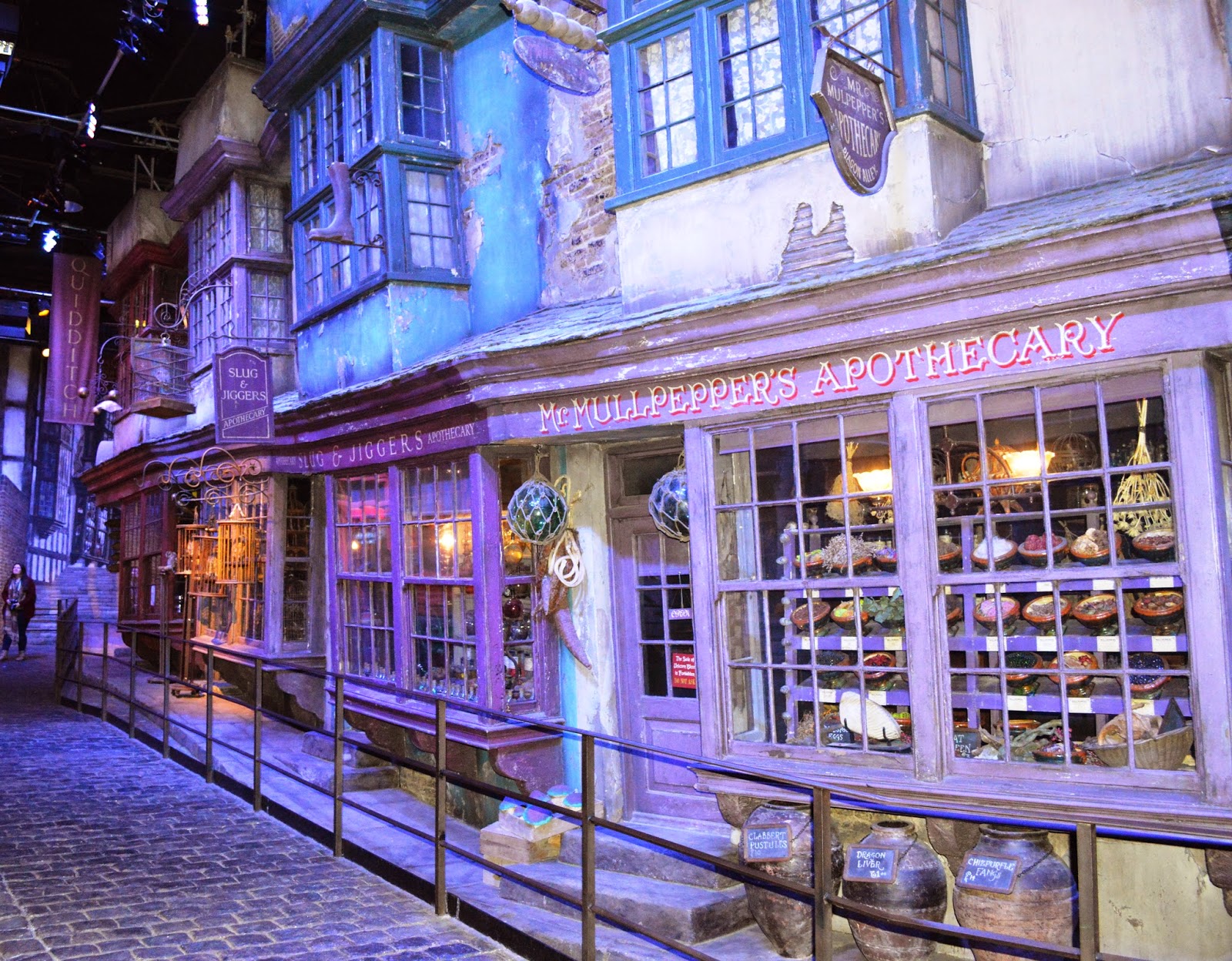 The staff at the studio tour pointed out a small error with the apothecary sign, over the shop front McMullpepper is spelt with two 'l's but on the hanging sign it is spelt with only 1. 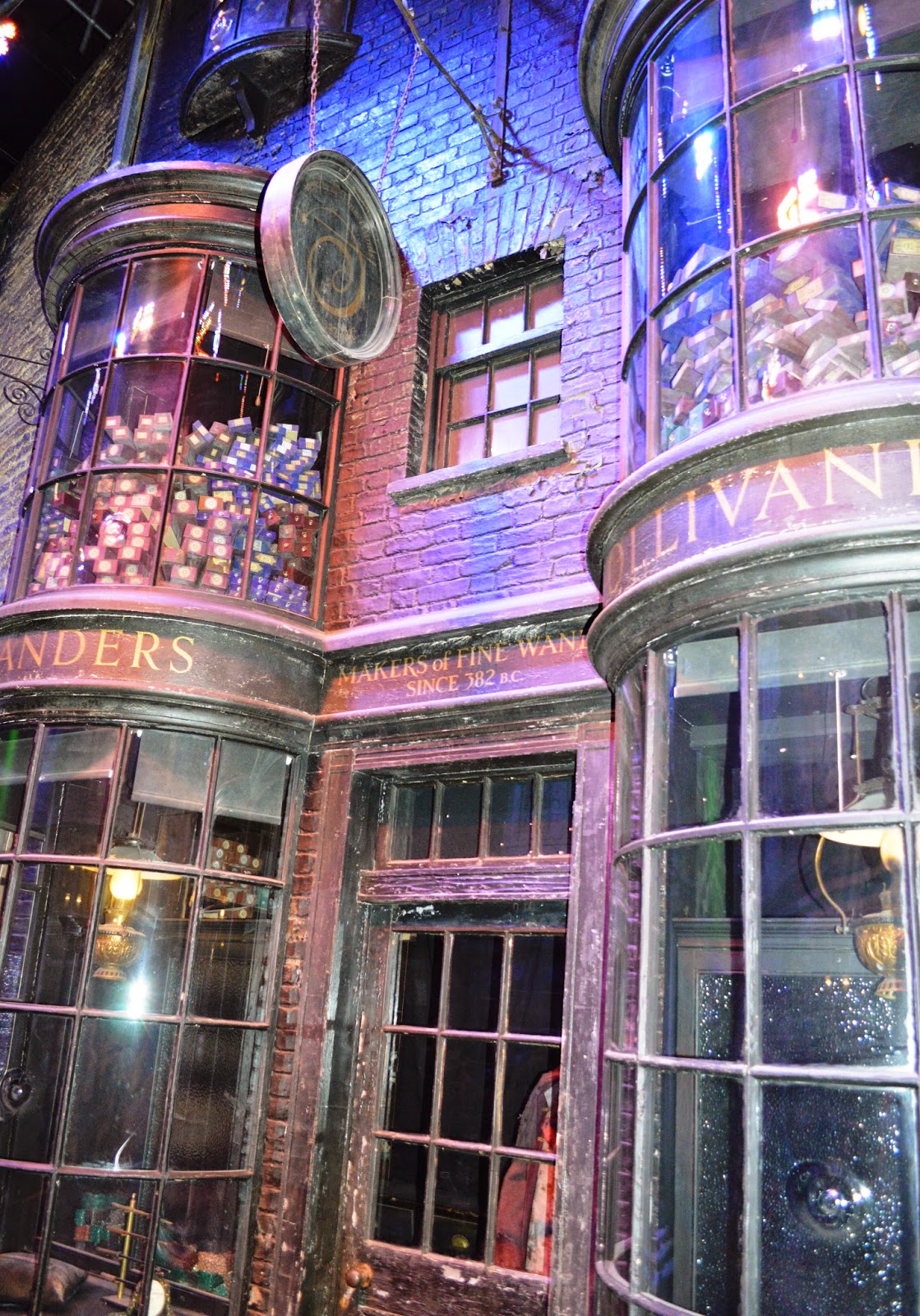 'Harry tried. And tried. He had no idea what Mr Ollivandar was waiting for. The pile of tried wands was mounting higher and higher on the spindly chair, but the more wands Mr Ollivandar pulled from the shelves, the happier he seemed to become"

According to Pottermore, my wand is as follows:
Length: 14 1/2 inches
Wood: Laurel ('it is said that  a laurel wand  cannot perform a dishonourable act[....] has the unusual and engaging attribute of issuing a spontaneous lightning strike in another witch or wizard attempts to steal it')
Core: Unicorn ('generally the most difficult to turn to the Dark Arts)
Flexibility: Surprisingly swishy 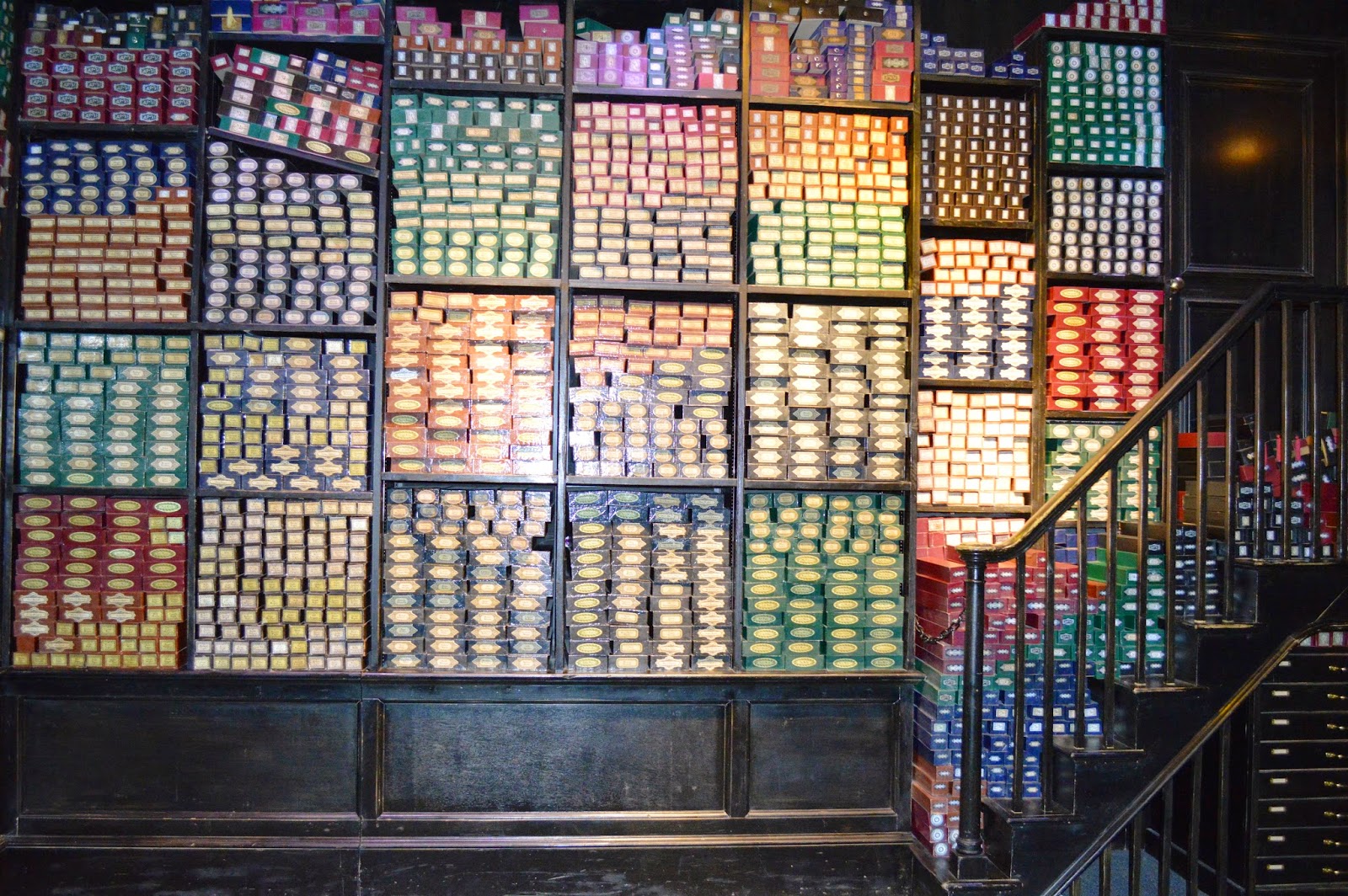 All these thousands of wand boxes were hand-crafted and each has the name of a person that worked on the film, including Daniel Radcliff, Emma Watson, Rupert Grint and J.K Rowling. 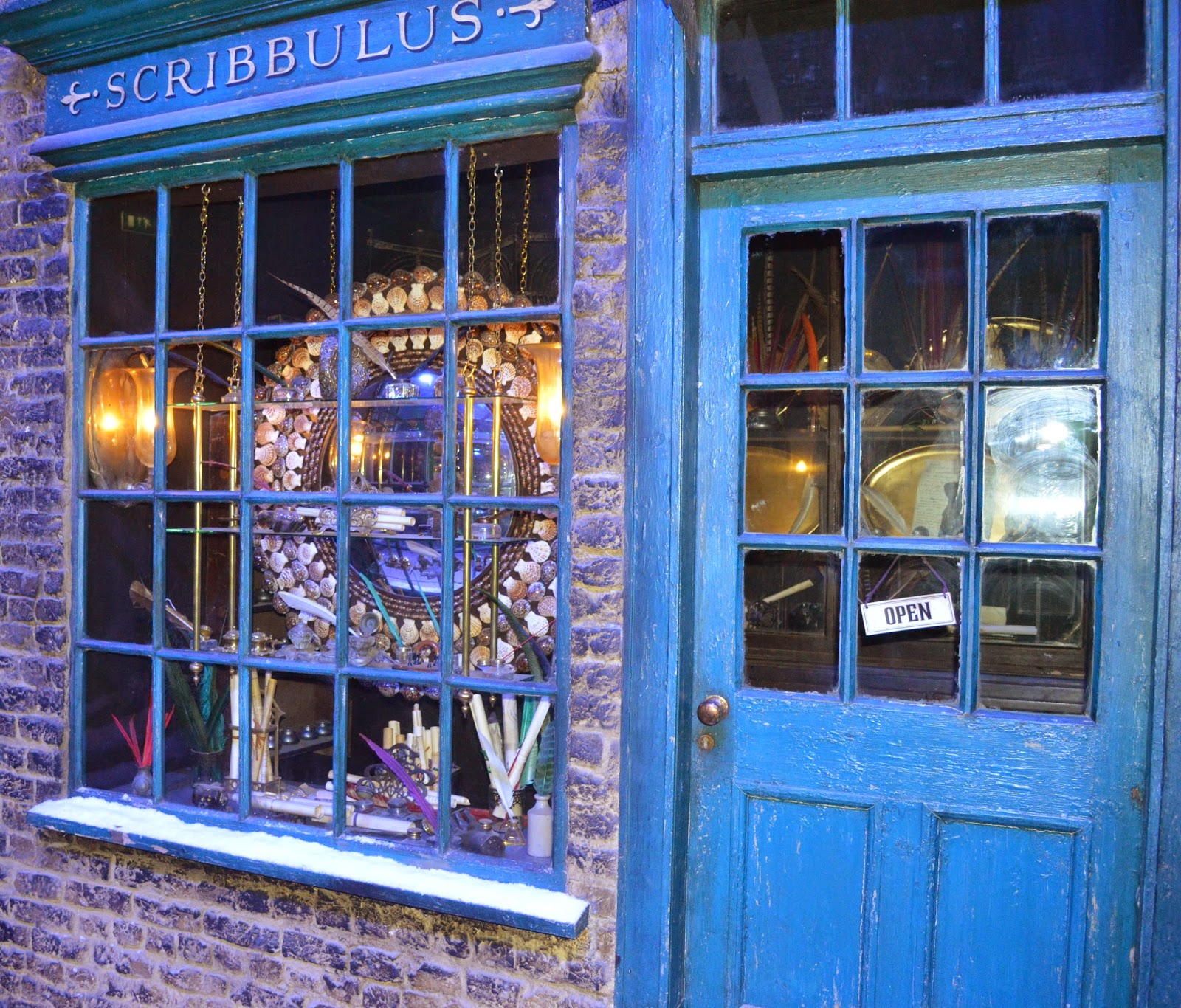 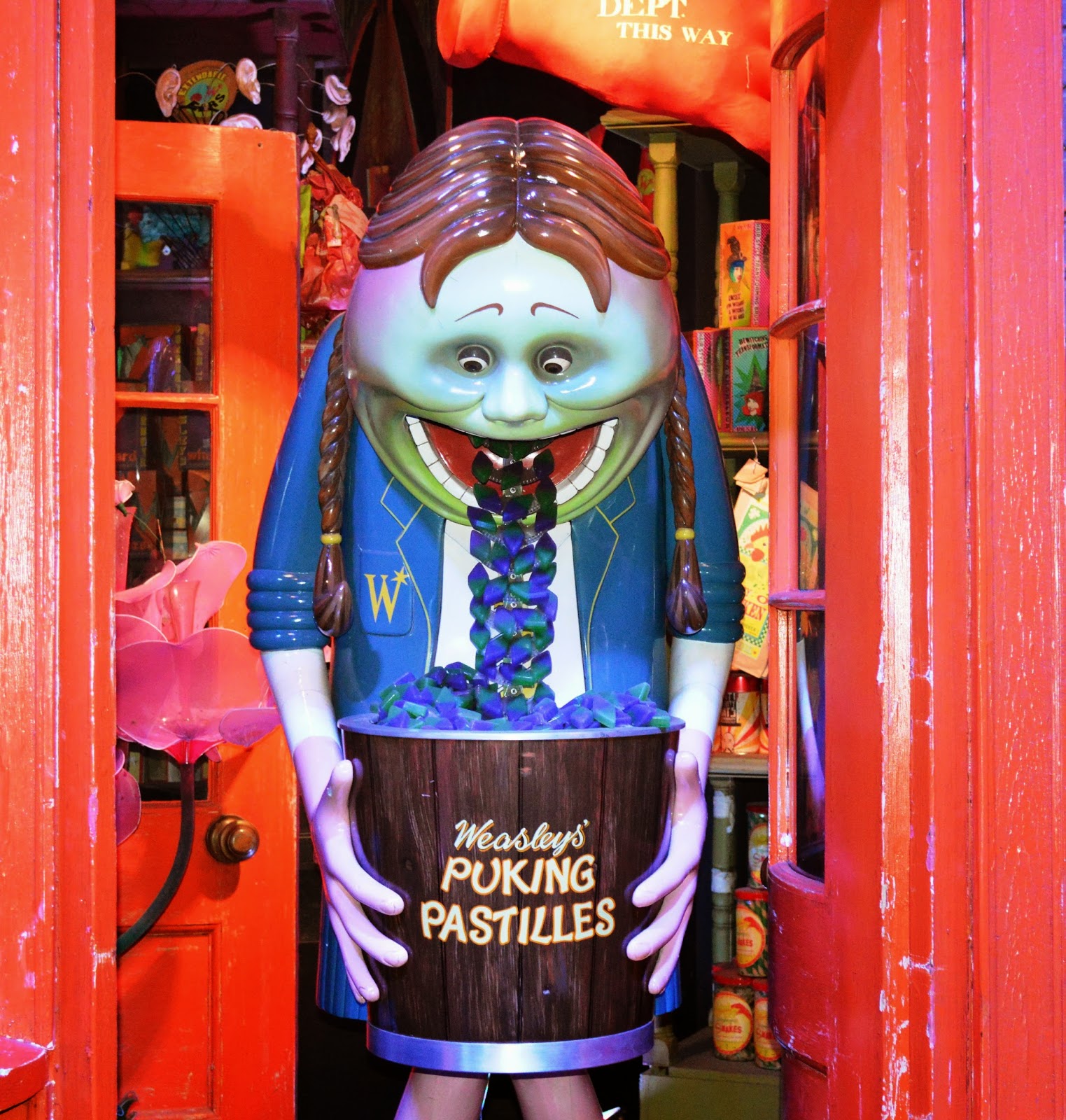 It took the crew three months to build the set and 6 months for the props team to create more than 20,000 different items and packages to line the shelves with. The level of detail is extraordinary.

Not surprisingly the set was re-used, Diagon Alley was transformed into Hogsmead by changing the shop displays. If you visit, see if you can spot the sign for The Three Broomsticks, the only indicator that it is doubles up for Hogsmead. 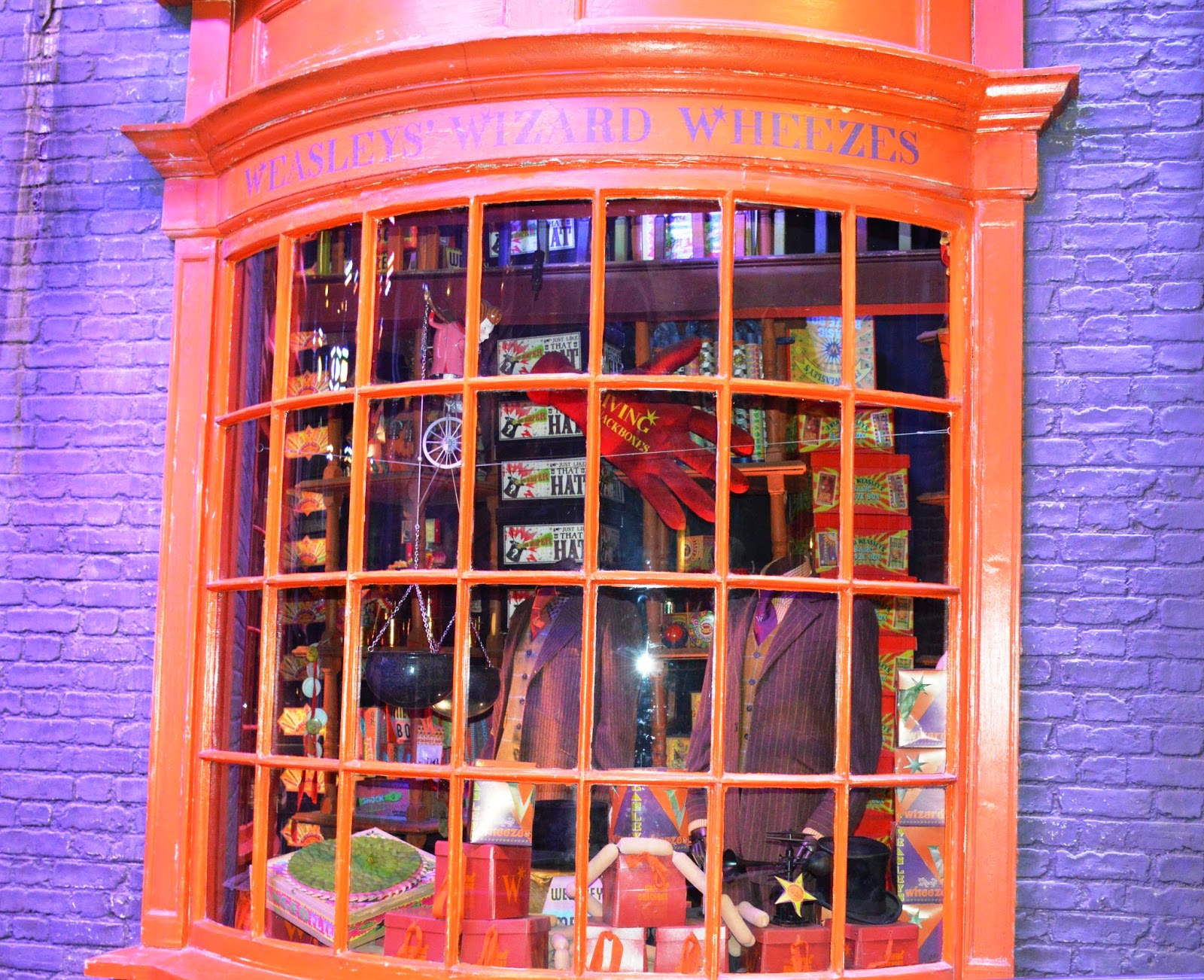 There was something about this doorway I really loved. My little sister thought it would be the place Dumbldore came to pick up knick-knacks for his office, you can just see her hand (and wand) in the left-hand corner of this picture. 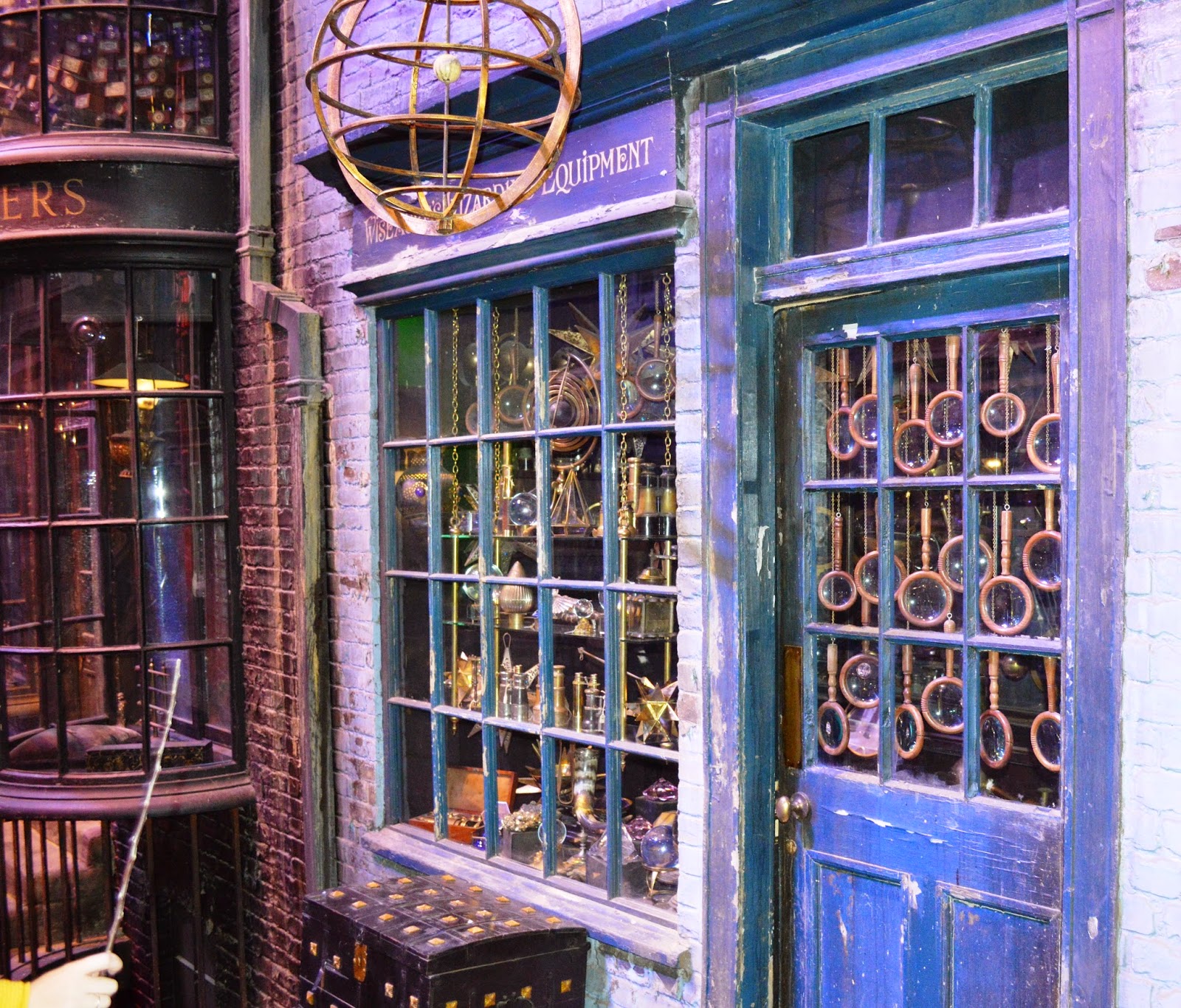 'Harry wished he had about eight more eyes. He turned his head in every direction as they walked up the street, trying to look at everything at once'
Email ThisBlogThis!Share to TwitterShare to FacebookShare to Pinterest
Labels: Diagon Alley, Flourish and Blotts, Harry Potter, Hogwarts, J.K Rowling, London, Ollivandars, photo, photograph, shopping, Studio Tour, Warner Brothers, Watford, Weasley's Wizard Wheezes