We Need to Talk About Kevin & Confessions of an Ugly Stepsister

It's been a busy couple of weeks, I've been settling into my new job and have had my wisdom teeth removed so I haven't been motivated to tackle The White Man's Burden  as I intended. Instead I re-read some of my old favourites whilst lying of the sofa whinging and recovery from my dental surgery.

First up We Need To Talk About Kevin, Lionel Shriver. This novel won the Orange Prize in 2005 and garnered a lot of attention and praise. It is a compelling examination of parental responsibility in the aftermath of a school shooting. Told in a series of letters to her estranged husband, Eva recounts the story of Kevin's upbringing and considers the warning signs that lead him to kill his classmates.It is a disturbing read.

Eva is ambiguously both painfully honest and unreliable at as narrator. She is open about her failings as a mother but also seems overly suspicious of her son from birth, and views his every action, such as his reluctance to breastfeed, as a personal affront and an act of aggression. 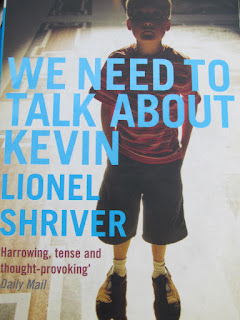 The novel is a complex character study, while Eva reflects and self examines, the reader is encouraged  to question what leads to tragedies such as school shootings. There is not a neat answer, which is a good this about this novel, Kevin's actions are not explained away be a physiological imbalance or the result of a neglected childhood, nor is he simply evil.

The second book I read on my bed of pain was Confessions of an Ugly Stepsister, Gregory Maguire. I love love love when contemporary authors subvert and embellish fairy tales and folk lore. It's my favourite genre, and Maguire is really talent at it. I've mentioned his Wicked  quadrilogy before on this blog.

Maguire takes the well known Cinderella story and sets it in seventeenth century Holland, a captivating hybrid of fairytale and historical fiction. The heroine is Iris, a plain stepsister of renown beauty Clara, she is smart, generous and very unlike the nasty, spiteful, ugly sister from the traditional tale. The novel explores the themes of beauty, artistic representation and transformation. 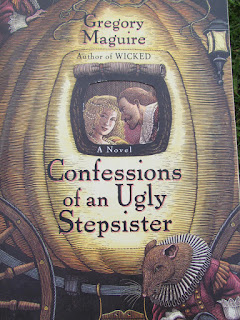 Another major consideration is the concept of 'sisterhood'. Iris, Ruth and Clara are step-siblings and are therefore rivals and allies. Women and girls had a tough time of it in the seventeenth century and Margarethe (the step/mother) quote "women must collaborate or perish" is interesting as it invokes the idea of a global sisterhood. Although hypocritical Margarethe is herself  ruthless and backstabbing when it comes to other females.

Fittingly for a novel about aesthetics, this book is beautiful. Each chapter is preceded by a full page illustration. The typography is delicate and old fashion, but still easy to read. 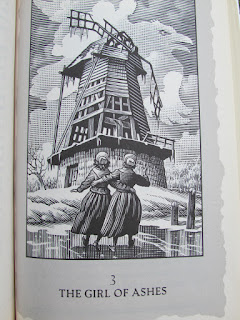 Two very different books. Have you read them? Which one is your favourite?
Email ThisBlogThis!Share to TwitterShare to FacebookShare to Pinterest
Labels: Confessions of an Ugly Stepsister, currently reading, fairy tale, Gregory Maguire, Lionel Shriver, review, We Need to Talk about Kevin