To make the most of the sunshine and a national holiday, today we visited Wimpole Estate and Farm. it is a National Trust property just outside Cambridge.

It seemed lots of other families had the same bright idea, as the grounds were full of people happily munching picnics and laying on the grass soaking up the sun.

We took our own picnic with us, Though there is a team rooms,  a restaurant and an ice ream van at the property.  I  had a sandwich of feta, green pesto and sun-dried tomatoes on spelt bread. Spelt bread is a good alternative if you are wheat/gluten intolerant by the way.  I took along my current book, Tupac Shakur- The Rose that Grew from Concrete.  I should be putting up a review in the next couple of days.
If you forget to bring a book with you to Wimpole and fancy having a read whilst lounging on the grass, There is a well stocked second hand bookshop. It has a bit of everything, books on local history and contemporary classics such as Being Jordan by Katie Price.

Outside I saw some very Game of Thrones-esque statues. My sister rolled her eyes when I mentioned this, I seem to be relating everything to the series at the moment.

Everyone at work now thinks I'm a massive geek, as I happened to mention that I like to loiter on Game of Thrones/ A Song of Ice and Fire forums and discuss conspiracy theories about Jon Snow's parentage (my bet's on Lyanna Stark and Rhaegar Targaryen).

The estate is surrounded by fields and has a working farm, with a petting zoo which is great for young children. Last time she came, my little sister got rammed by a crazed sheep- she swears it's eye dilated with rage before it went for her.

A first we couldn't work out what weapon this man was using to batter the other bloke- I thought it was barbecue tongs, until my dad pointed out it is a jaw bone. The statue actually represents Samson, killing someone with  a donkey jaw, according to legend he murdered over 100,000 people this way. 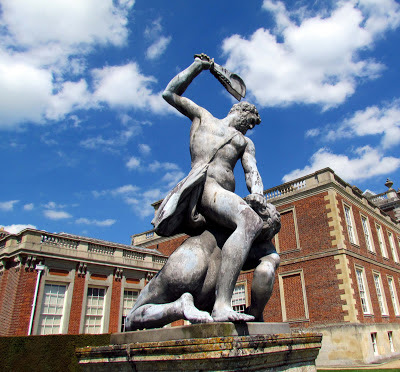