I'm a massive fan of fairy-tales. I've liked them since I was little, but my appreciation has grown since I've gotten older. It's the history of them that appeals to me, the tradition of oral storytelling and the common themes that appear across cultures and countries are really fascinating. For example, human to animal transformation is common in folk-stories throughout the world.

Fairy-tales can revel a lot about a society, they are rich with symbolism and often give warnings or have a moral message. Written primarily for children, fairy-tales instructed children how to behave, to respect their elders and stay out of the woods. 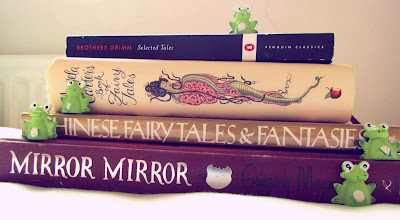 As well as representing idealised moral behaviour, traditional  fairy-tales can also subvert social norms and challenge expectations, the prince doesn't always get the girl. The tales aren't always the happy-ever-after Disney version. Women are not just damsels in distress, but are also ruthless, cunning and more that capable of rescuing themselves.

Another aspect I love about fairy-tales is how the supernatural and uncanny effortlessly intertwine with the mundane and human. There is magic all around, a walk in the woods can lead to adventure, or a chance encounter with an elderly lady could result in all your wishes been fulfilled. I like how in fairy-tales the world is brimming with potential.