Seems ages ago that I did a proper book review- so allow me to present Dust and Shadow by Lyndsay Faye....

The Plot: A serial killer is on the loose, dubbed The Knife, he is murdering, then mutilating street-walkers in Whitechapel. Unable to solve the case, the metropolitan police engage the help of a renown crime-fighting duo, Dr Watson and Sherlock Holmes. It isn't long before suspicion falls on Holmes himself, and the private detective may well have met his match with Jack the Ripper.


I love Lyndsay Faye's later novel, (see review for Seven for a Secret here) so was intrigued to read her début offering. Lots of what I love about her writing is also on offer in Dust and Shadow, her attention to detail means she is a dab hand at creating atmosphere and setting. Victorian London really comes to life, the back alleys, and the destitute people that inhabit them are vividly described. There are fair few Victorian classics, street urchins, sensationalist journalism and drunkards - and I'm glad they're there. This pastiche would seem incomplete if these clichés didn't make an appearance.

Purists of Sherlock Holmes might take umbrage to the inclusion of of a woman on the detectives team, Mary Ann Monk, a workhouse resident, prostitute and thief, s vital in Holmes and Watson's investigation. Personally I warmed to her, and was pleased that women had a vocal role in the plot, rather then just being corpses.

Of course, the novel is inspired by Conan Doyle's original novel and fans will no doubt recognise allusions to the books and Holmes' cases, I haven't read any of them, so some must have past me by.

The part of the novel I disliked was Sherlock Holmes- which is a major problem really as he is the  main character. His deductions got on me nerves - how he could make conclusions about people or events by zoning in on tiny or seemingly irrelevant details. To me it is just too far fetched, and feels like cheating, I felt like I couldn't play detective whilst I was reading as the crime is solved by these huge leaping deductions and out-of-the-blue pronouncements. This habit is what puts me off reading the original Sherlock Holmes as well. 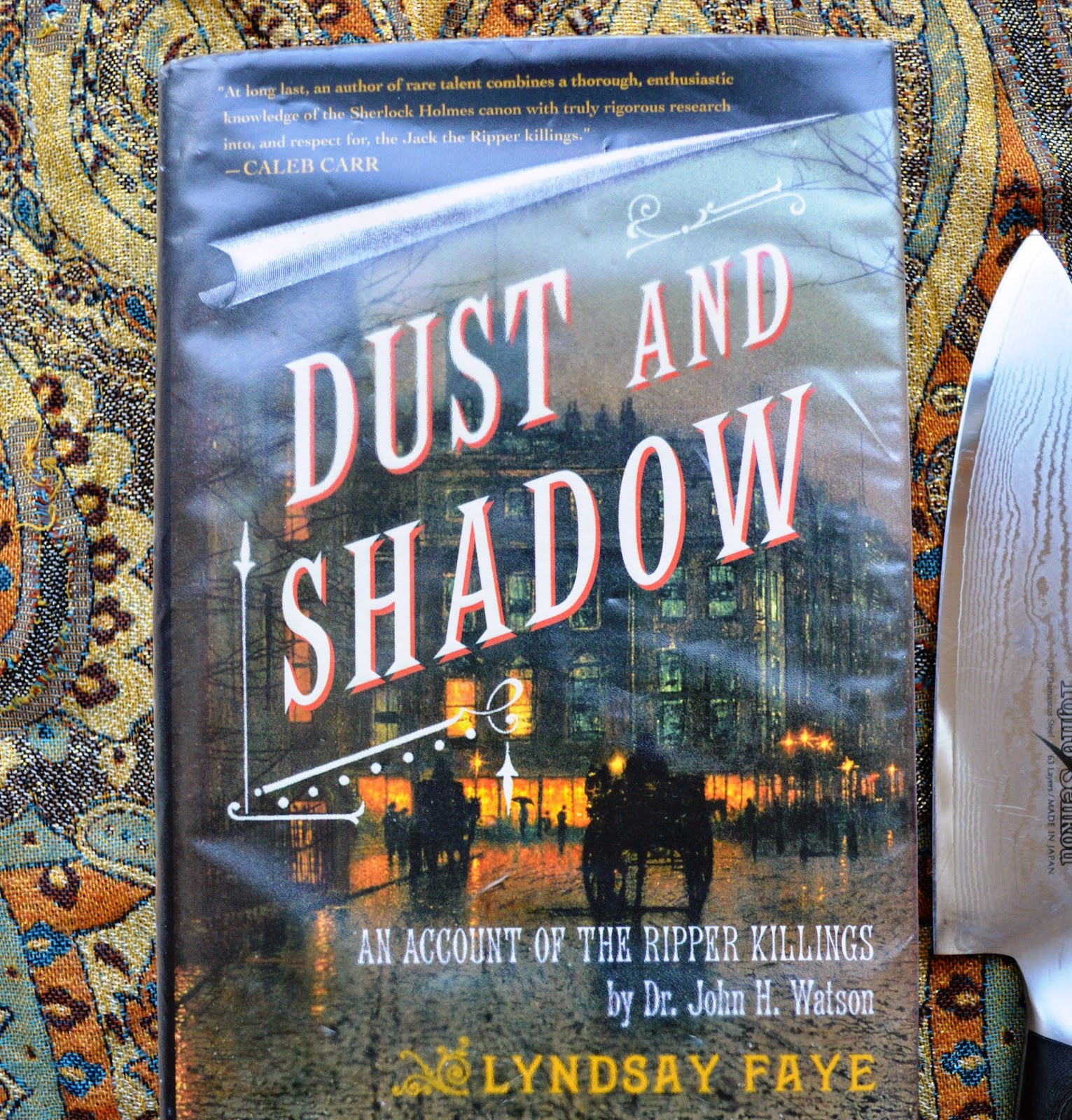 Obviously, the Ripper killings are real and still unsolved, and I think Faye has picked a really good case to fictionalise. Everyone comes to the novel with preconceptions or  theories about the identity of the murder, but Faye makes the plot unravel in a fresh way, the identity of Jack seems plausible.

I wanted more interaction between the private detectives and the police. This would have been rich ground for tension, Holmes and Watson could be viewed as interfering, or they may themselves see the police as bungling. Both these things are hinted at, but in my opinion could be developed further. Also there is nothing really about the police's own investigation, they just appear to leave it up to Holmes, which didn't ring true to me. Especially, as the newspapers imply Holmes is the murder.

Dust and Shadow is a solid effort, but it is also clearly a first novel, Faye's style and confidence has noticeably improved in her later work. As I've already said, I've not read any Conan Doyle so I can't comment on how this re-imaging compares to the original. I was entertained throughout, but it's not the sort of book that is worth a re-read, as the main appeal is wanting to discover the identity of Jack the Ripper.
Email ThisBlogThis!Share to TwitterShare to FacebookShare to Pinterest
Labels: book, book review, crime, detective, Dust and Shadow, fiction, hardback, Lyndsay Faye, review, Sherlock Homes