Yay more feminist literature! I  was shocked to see that so far this year my reading list has been many male, to rectify this, this month (with the exception of two books) every novel I've read has been written by a woman. 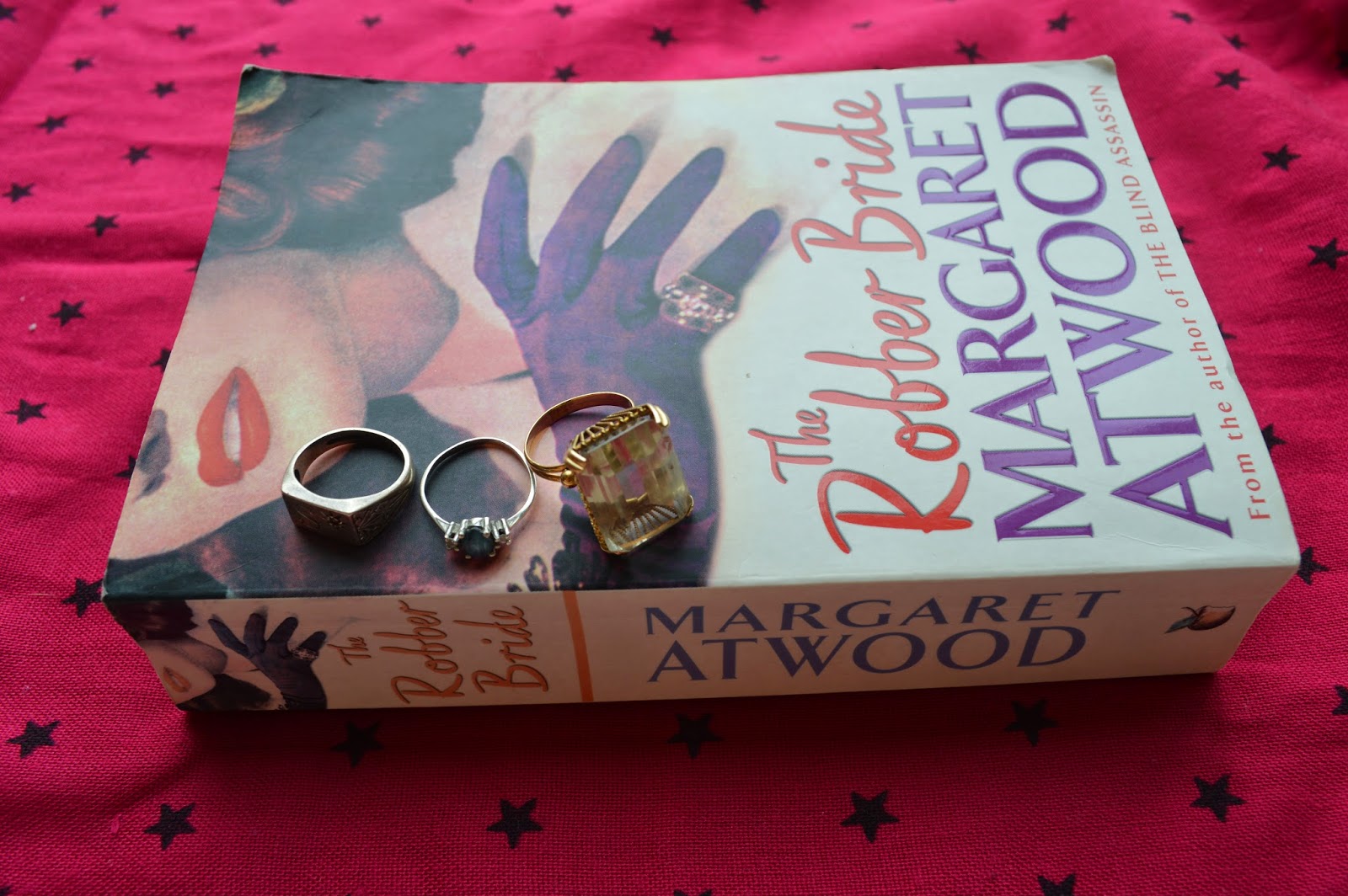 I first read The Robber Bride years ago, so though I could remember the gist, the ending was a nice surprise. I don't think I can say it enough, I adore Margaret Atwood, without fail her novels are full of wit and insight.

The Plot: As three woman share a companionable lunch, an old enemy comes back from the dead. Zenia, beautiful, capricious and utterly merciless was thought to have been killed in a bombing, she is however very much alive. Having once already destroyed the lives of Tony, Charis and Roz, Zenia proves she's lost none of her venom and capacity to harm.

It's wrong, but I do admire Zenia. She is destructive, vicious and untrustworthy, but she is also single-minded and resourceful. Her background is difficult to determine, she invents and re-invents herself in order to manipulate others, and though she takes advantage of people, it also an impressive skill. Zenia is immoral and undoubtedly a villain, but I respect her tenacity (on no, I've been seduced by Zenia as well!).

Tony, Charis and Roz are wronged by Zenia, but part of their problems are of their own making, all three are in relationships with unworthy men. In a way, Zenia did a them a favour by showing the feckless of their partners. Though Tony, Charis and Roz do have some redeeming attributes, they are forgiving of their husbands/boyfriends and a frustratingly docile at times. They all had issues long before Zenia entered their lives, but their bile is directed towards her. Ha, I'm making Zenia sound like a victim, which she certainly not, and my pity ultimately rests with Tony & co. 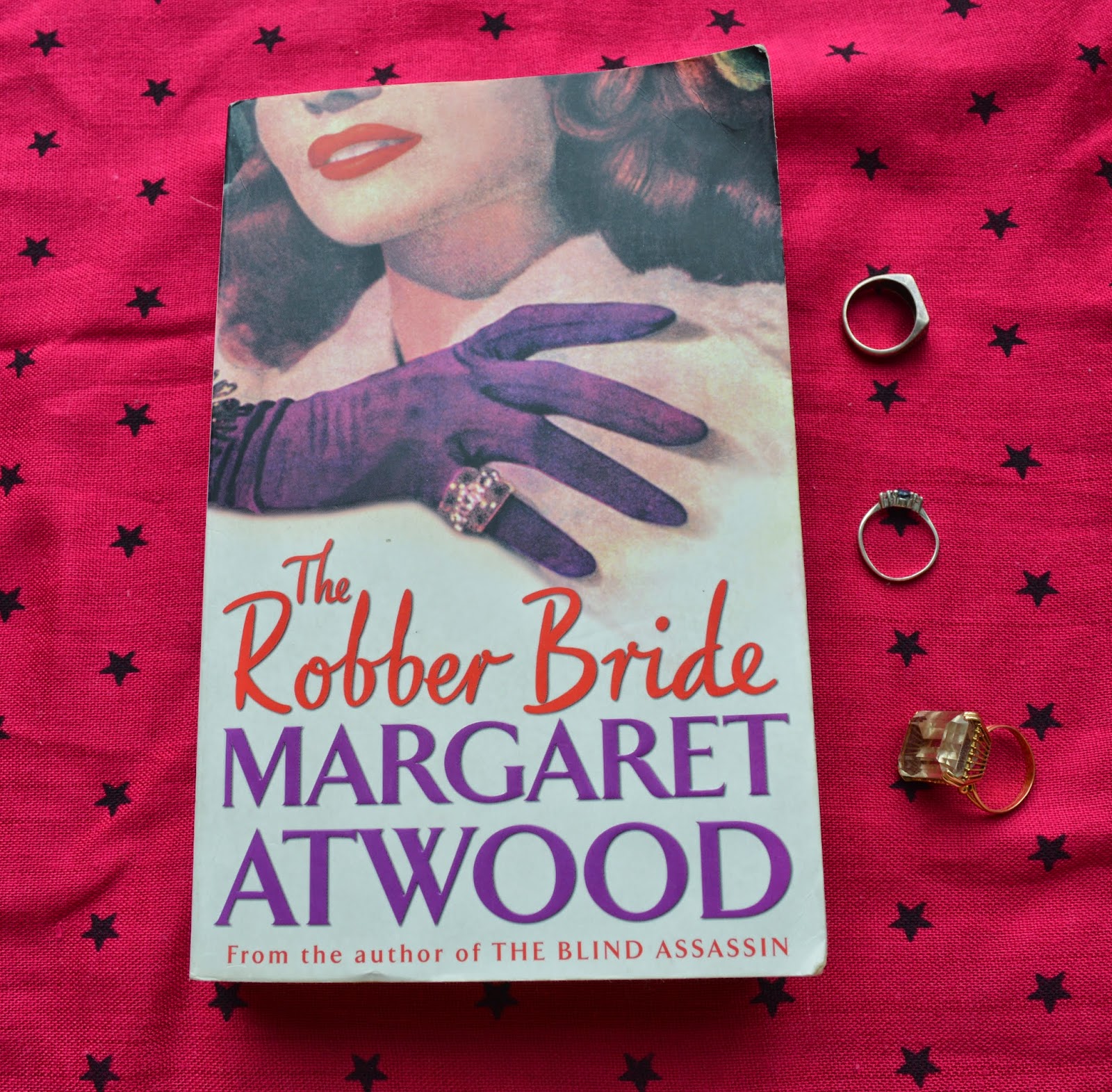 It just that I can't bare wet men, and  West is the biggest wet of all. Tony deserves better than him. Their relationship is immature, West is still pining for Zenia, and Tony's reverence for West is like a school girl crush. I sure as hell wouldn't take a man back who left me for his ex but comes crawling back once he's dumped. I'm starting to go of on a tangent.....

Anyway. One thing I really like is how the how different Tony, Charis and Roz are and how you get to learn their whole history and perspective. I think all reader will see themselves in one or more of the women, including Zenia even though she is more of an enigma.

The Robber Bride spans from the 70s to the early 90s, and I would say that second wave feminist theory has had a big influence on the novel, though the themes of love, friendship and womanhood are timeless. There are elements of the whore/virgin dichotomy between Zenia and Tony, Zenia is an expert at manipulating men, and Tony is sexless. Exploiting sexuality and wielding femininity as a weapon the way Zenia does, these issues were a prominent concern in second wave feminism.

The Robber Bride is amongst my favourite Atwood's, because I felt warmly to all the characters (apart from the men) and the mystery of Zenia intrigues me. I know Atwood published a short add-on, I Dream off Zenia with the Bright Red Teeth to tie up some of the loose ends, but I've yet to read it. I'm more not sure if I will, part of the appeal of Zenia is she is unknown, I don't want definitive answers on who she is, or why she acts the way she does.