Seed to Harvest is a collection of the four Patternist novels in one volume. It contains; Wild Seed, Mind of My Mind, Clay's Ark and The Patternmaster in the chronological narrative order, not in the order they were published. Survivor is also part of Patternist series, but is not included in this collection as it was later disowned by Octavia Butler.

I read Wild Seed back in April, but didn't round to reviewing it so I'm going to review all four novels in a singular post now. Be aware there maybe spoilers for the whole series. 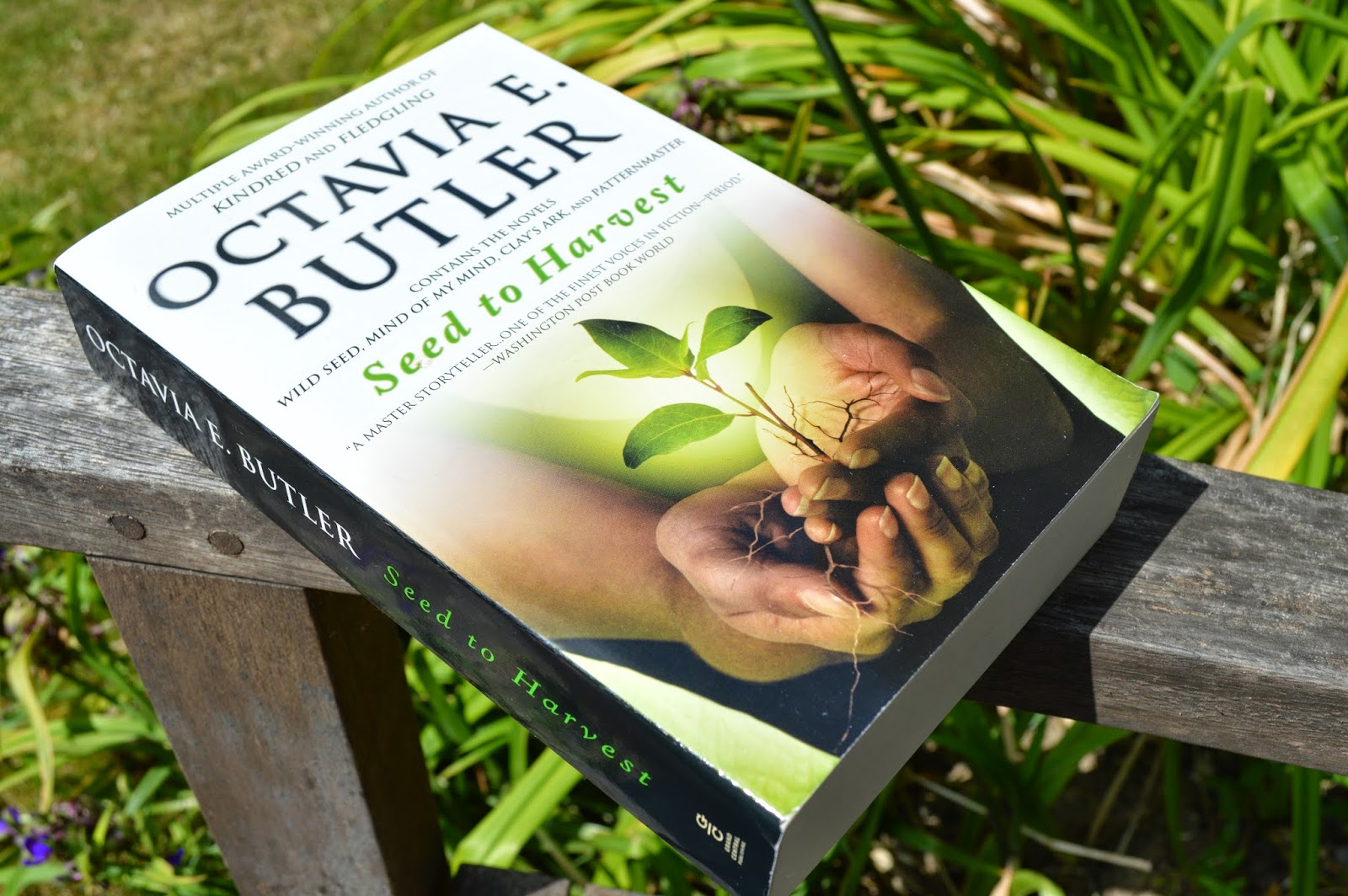 Synopsis:
Wild Seed: Dora, an immortal and immoral being seeks to create a new race of supernaturals by selective breeding. Anyanwu would be an asset to his collection, as she possess the powers to shape-shift, regenerate and heal, though Dora will not find her easy to control. Anyanwu attempts to determine her own life in the face of Dora's relentless persecution, but eventually one must submit to the other.
Set in both rural Africa and 17th century America.

Mind of My Mind: As a result of Dora's selective breeding programme, Mary is a powerful telepath, able to link minds with other telepaths and draw on their strength through a mental pattern. Initially Dora's prodigy he becomes wary of her growing power and influence.

Clay's Ark:  When Elias returns from a space mission he brings back a highly contagious disease. In spite of his best efforts he soon infects a isolated family that came to his aid. The disease increases speed, agility and ability to heal, but also compels suffers to spread the infection at any cost.

The Patternmaster: War rages between the Paterrnists (desended from Dora's telepaths) and the Clayark's. Meanwhile the Parernists are beset by and internal political struggle as Teray and Coransee fight to decide who will succeed the Patternmaster and have ultimate control over the telepathic pattern.

Rating:  ««««¶ (4/5) this score is for the series overall, though I preferred some novels over others. Wild Seed is my favourite.
Full review under the cut:-

What I really enjoyed about the series is it's originality, it is hard to predict what will happen next. When the Clayarks where introduced in the third novel I had no inking of what their connection was to the previous to two novels. The abilities of Dora and Anyanwu are unique, and though there have been many other novels with shape-shifters, healers, telepaths etc. Octavia Butler has constructed an alternative world that manages to present these superhuman attributes in a new and different way.

The conflict between Dora and Anyanwu was my favourite part of the series, hence why Wild Seed is my series winner. Their dynamic is engrossing, as they are both dependant on each other, they have mutual respect, yet Dora is determined to make Anyanwu submit to him, and does horrendous things in  a bid to reach this goal. I was disappointed that this relationship wasn't furthered in the following novels, Anyanwu is renamed Emma in Mind of My Mind and she loses all her strength of personality, she has become to accepting of Dora's treatment of her and her descendants. In comparison, the other principle characters to not have the same nuance and complexity of Dora and Anyanwu, and the other novels in the series suffer because of it. 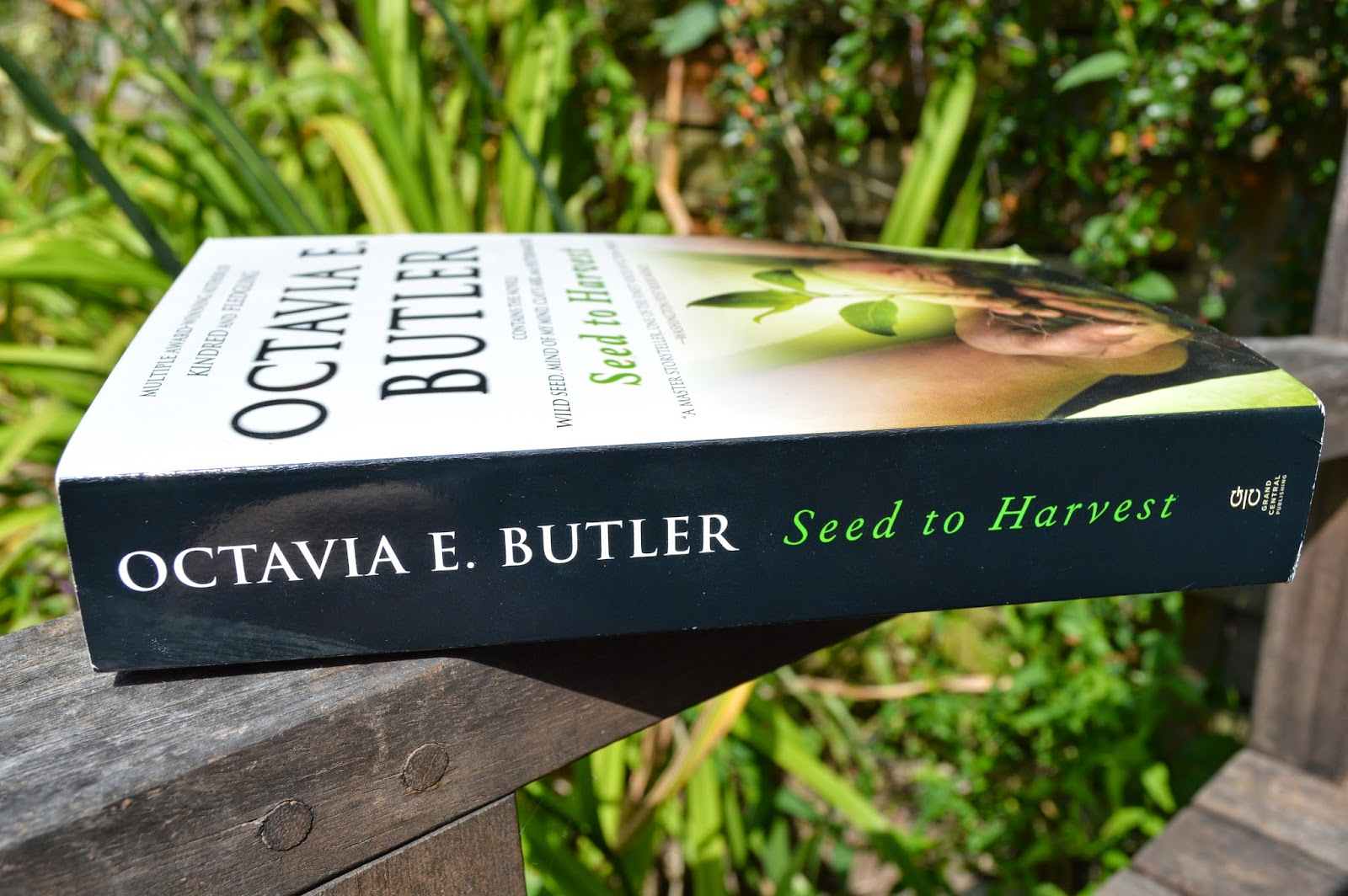 Teray and Coransee for example are not developed enough for me to care who gets control of the pattern. Also women are marginalised in both Clay's Ark and The Patternmaster, relegated to supporting cast rather than main players. This is a shame as one of the things I really like about Octavia Butler's work is she usually puts women at the forefront of the action, a rarity in science-fiction.

The Patternmaster was the first of the series to be be published and I think it shows. The conflict between the Patternisst and Clayarks need further expansion, the novel is lacking in battles and fights and was anticlimactic for a series finale. That being said, I was still entertained and the novel does resolve the main narrative threads.

Seed to Harvest is an important contribution to African-American science-fiction (sometimes known as afro-futurism) and is definitely worth a read if you are familiar with the genre or what to know more. It is not however, my favourite Octavia Butler, and would suggest you check out Kindred first.

On one last (superficial) note, they really need to sort out a better cover design for this novel. The current jacket looks like a crappy self-published ebook and I can imagine it'll put a fair few people off.