Just realised that so far I've only reviewed two books this months, that's a pretty poor show for a book reviewing blog.

I tried a sample of Nnedi Okorafor's Who Fears Death back in May, so I've had to wait a fair while to read the whole thing. I bought it has part of my recent splurge.

The Plot: Alone in the desert, a woman who has survived the genocide of her village and a horrific rape by an enemy general, gives birth to a girl with hair and skin the colour of sand. She names her child Onyesnwu, 'who fears death'.  Onyesonwu, already ostracised due to the nature of her conception, is further rejected by her community when she  starts to exhibit signs of powerful magic. Able to transform into any animal, travel through the spirit world and even resurrect the dead, Onyesonwu is powerful and dangerous. Her volatile spirit  and gender mean she has the capacity to cause great harm, as well as good.   However,  as the violence between the Nuru and the Okeke escalates a prophecy is made, foretelling of a saviour who will end the war.

Full review and quick glossary under the cut *spoiler warning*:-
(I've included a brief list of terminology, as the novel can get confusing)


Terminology:
Nuru people: yellow-brown skin, narrow noses, thin lips and brown or black hair. The ruling elite, live a privileged existence, their exalted position is set down in The Great Book. Perpetrators of violence, they have enslaved the Okeke and driven others from their homes.
Okeke people: dark drown skin, wide nostrils full lips and thick black hair. Persecuted by the Nuru, many Okeke have crossed the desert to build their communities in relative safety. However, the violence is escalating and even distant villages are threatened by maundering Nuru.
Ewu people: sand coloured hair and skin, freckled cheeks. Often the result of Nuru men's  weaponized rape of Okeke women, Ewu children are stigmatized by both communities.
Juju: sorcery, magic, low-level compared to The Mystic Points which only the very best sorcerers can control
Eshu: shape-shifter
Wilderness: the spirit world, populated by Alusi. The place people go when dead, powerful sorcerers can enter the wilderness and recall people from the dead, or use this plain to attack living peoples non-physical self.
Alusi: Forces, deities and spirits.

As you can see Nnedi Okorafor is very through with her world creation. The magic in Who Fears Death comes with it's own set of rules and constraints and all sorcerers manipulate it with vary competency and affect. A fair amount of time is dedicated to Onyesonwu's training and the concept of the Mystic Points which is interesting and also means that her skills are power is grounded in what comes before. I liked that Onyesonwu had to struggle and practice to develop her powers, and it made the magic seem realistic.

I find in a lot of science-fiction, the hero skills are simply innate, that they the save the world just by being, so it was refreshing to have a character that had to become a hero and really test her strength. I'm not sure if I'm myself clear, say in comparison to Harry Potter (don't get me wrong, I'm fanatical about HP), Harry wins against Voldemort more of who he is, rather than what he can do, he's a fairly average wizard and no match for Voldey in the magic skills department. Onyesonwu has to become a better sorceress than Daib (the big bad of the novel) to defeat him. She does this by learning, by listing to her teachers and also embracing her own nature. 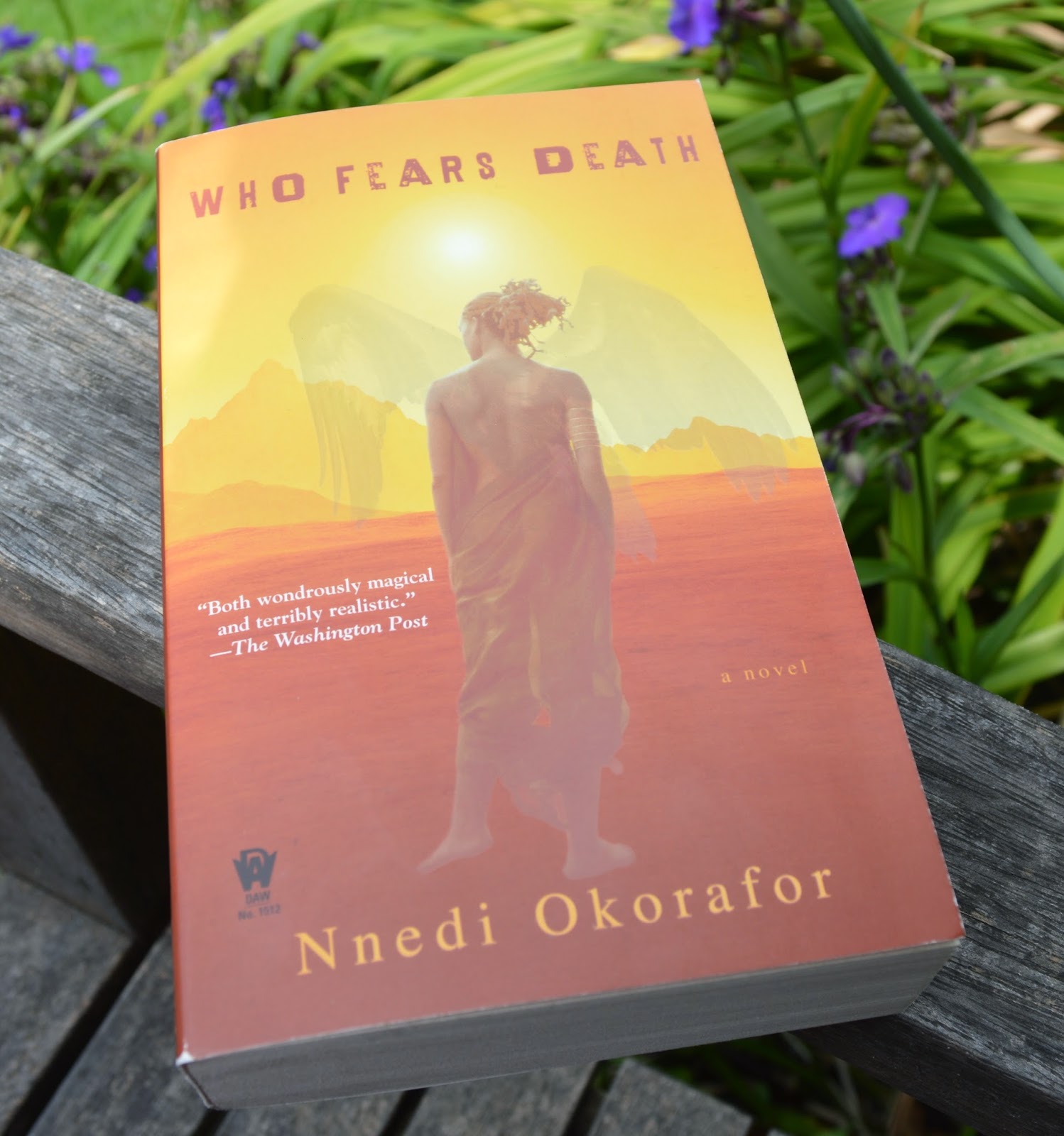 I cheered when Onyseonwu was able to exact her revenge by harnessing her ability to carry a child. She is powerful because she is a woman, not despite of it. This is particularly important as throughout the novel Onyseonwu and other women had experienced incredible violence because of their gender, from her mother's rape, to her eleventh-year ritual in which she is circumcised.

Female sexuality and sexual liberation are key themes of the novel. As well as being a magical odyssey and a fight between good and evil, Who Fears Death is also a bildungsroman, a coming of age story. Onyseonwu and her female companions all struggle with desire, as premarital sex is associated with shame and pain. Luyu is refreshing unapologetic about her promiscuity and she was a favourite of mine.

Onyesonwu's relationship with Mwita is touching, and their dynamic is complex. Mwita is supportive of Onye, but is also jealous of her abilities and occasional suffers from a case of male entitlement. My only criticism is I really hate the word 'intercourse', I don't know why it just makes me cringe, 'sex' would have been preferable.

There is so much about this novel I could pick apart and analysis. The war between the Nuru and Okeke can be seen as comment on the history of slavery and colourism within the black community. There are also several feminist/womanist concepts in the novel.

If you're not after a political read, don't be put off, Who Fears Death doesn't come across as dogmatic. You don't have to read it critically, it also just an entertaining novel, with an enjoyable narrative arc. Okorafor imagined Sudan, is terrifying but also immensely detailed and fully realised.
Email ThisBlogThis!Share to TwitterShare to FacebookShare to Pinterest
Labels: afro-futurism, book review, Nnedi Okorafor, paperback, review, science fiction, Sudan, synopsis, terminology, Who Fears Death