I'm making my way through the Canongate myth series, so I was really pleased to pick up The Fire Gospel from my local library.

I've blogged about Canongate before, basically they have commissioned well respected authors to retell myths, folk-tales and biblical stories, if you want read my reviews of the other Canongate books click on the titles below:-
Ragnorok  A.S Byatt
Baba Yaga Laid an Egg, Ugresic Dubravka
Weight, Jeanette Winterson

The Plot: When visiting a museum in war-torn Iraq, Theo Gripenkerl stumbles upon an ancient manuscript written by a man named Malchus, who personally witnessed the betrayal and crucifixion of Jesus. When the fifth gospel is published it inflames believers, sceptics and Amazon critics alike.

Like the majority of the books in the Canongate Myth series, this is a slim text. It can be easily read in a couple of hours, so I'm glad I borrowed it rather than bought it as I don't really see it as value for money. Also, in comparison to the other books I've read in the series, this is the weakest one.

The novel is supposed to be a retelling of the myth of Promethus, a Titan who gave the knowledge of fire to humans and in return was punished by Zeus. However, to me the novel seemed to me more a satire about on-line book reviewers and Christian theology than a re-imagined Promethus. There are of course some parallels between Theo and Promethus, is is knowledge that is incendiary in Faber's book rather than fire, and Theo is punished for releasing new information on the world. However, if I didn't know that The Fire Gospel was intended to be a new Promethus story, I won't have noticed. 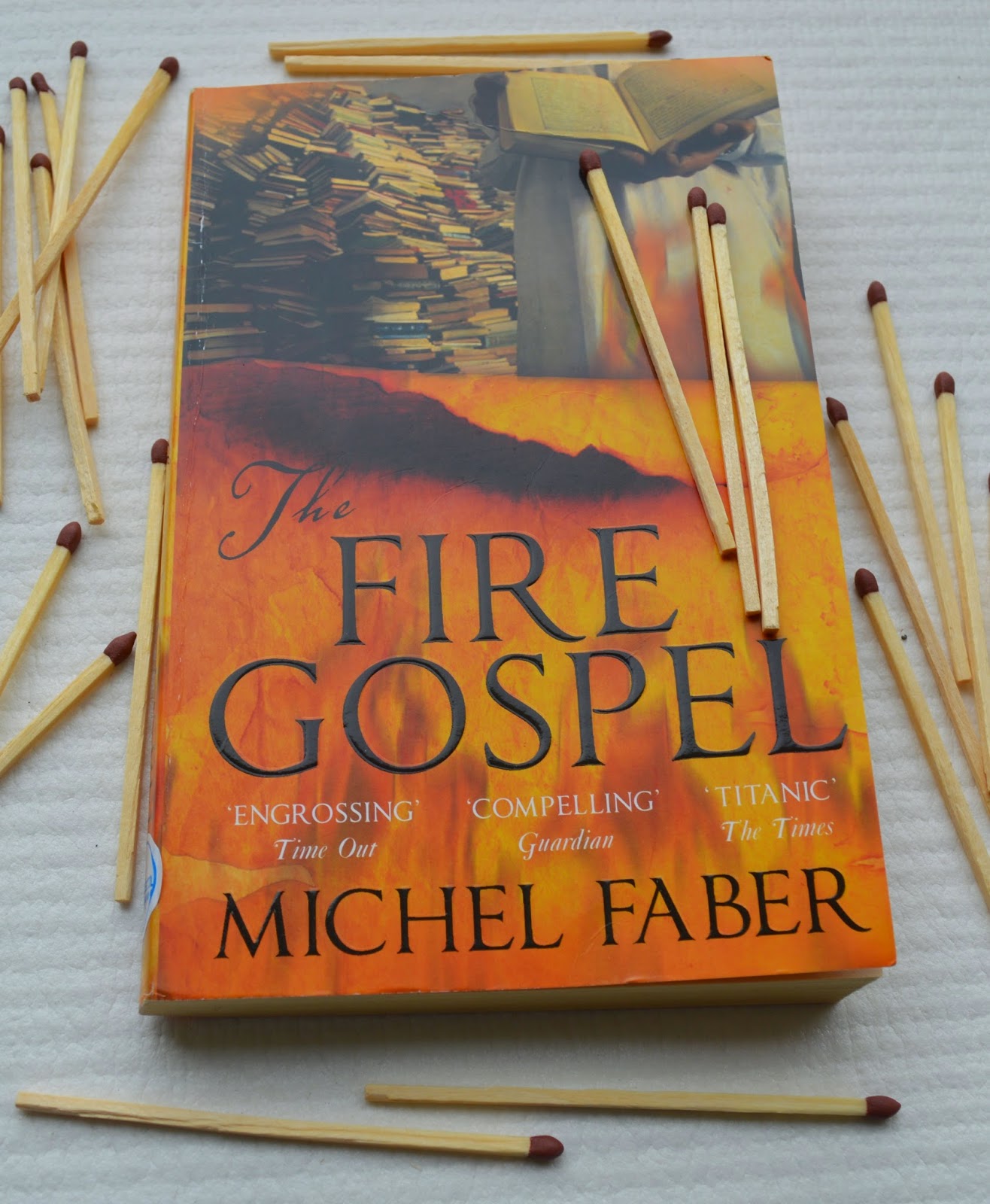 The Fire Gospel is not without some good points. It is funny, the Amazon reviews in particular made me smirk, especially as I saw myself in the reviewers. Theo is a slightly unpleasant,  recognisable character- an ordinary, dull bloke that starts to become more obnoxious as he begins to believe his own hype. Novels poking fun about publishing and authors can be in danger of being to self-involved and hampered by in-jokes, but that's not the case with The Fire Gospel. The humour is tongue-in-cheek and self-aware, but accessible and genuinely funny.

I wish more had been said about the cultural theft and ownership as it is a complex argument that personally interests me. There is a part about copyright and concern that Theo stole and then smuggled Malchus' manuscript out of the country, and I felt this could have been expanded on. British museums are stuffed with artefacts that have pinched from other countries, under the guise of preservation or a sort of 'finders keepers' mentality, and I know I'm complicit in this theft as I visit these museums. The Fire Gospel could have engaged with debate more.

A strength of Michel Faber's book is how fair he is to Christians, although the novel is satire it didn't feel like he was mocking their beliefs as his target is inflated author and reviewer egos than Christianity. Philip Pullman's The Good Man Jesus and the Scoundrel Christ is part of the Canongate series and in my opinion more provoking than this. Then again, I'm not Christian, so it's not really my place to determine what believers will or won't find blasphemous. Perhaps, The Fire Gospel suffers because it is too tame, there are no grand revelations in Malchus' account of Jesus, and although people in the novel act as it is controversial, I didn't really understand the fuss. 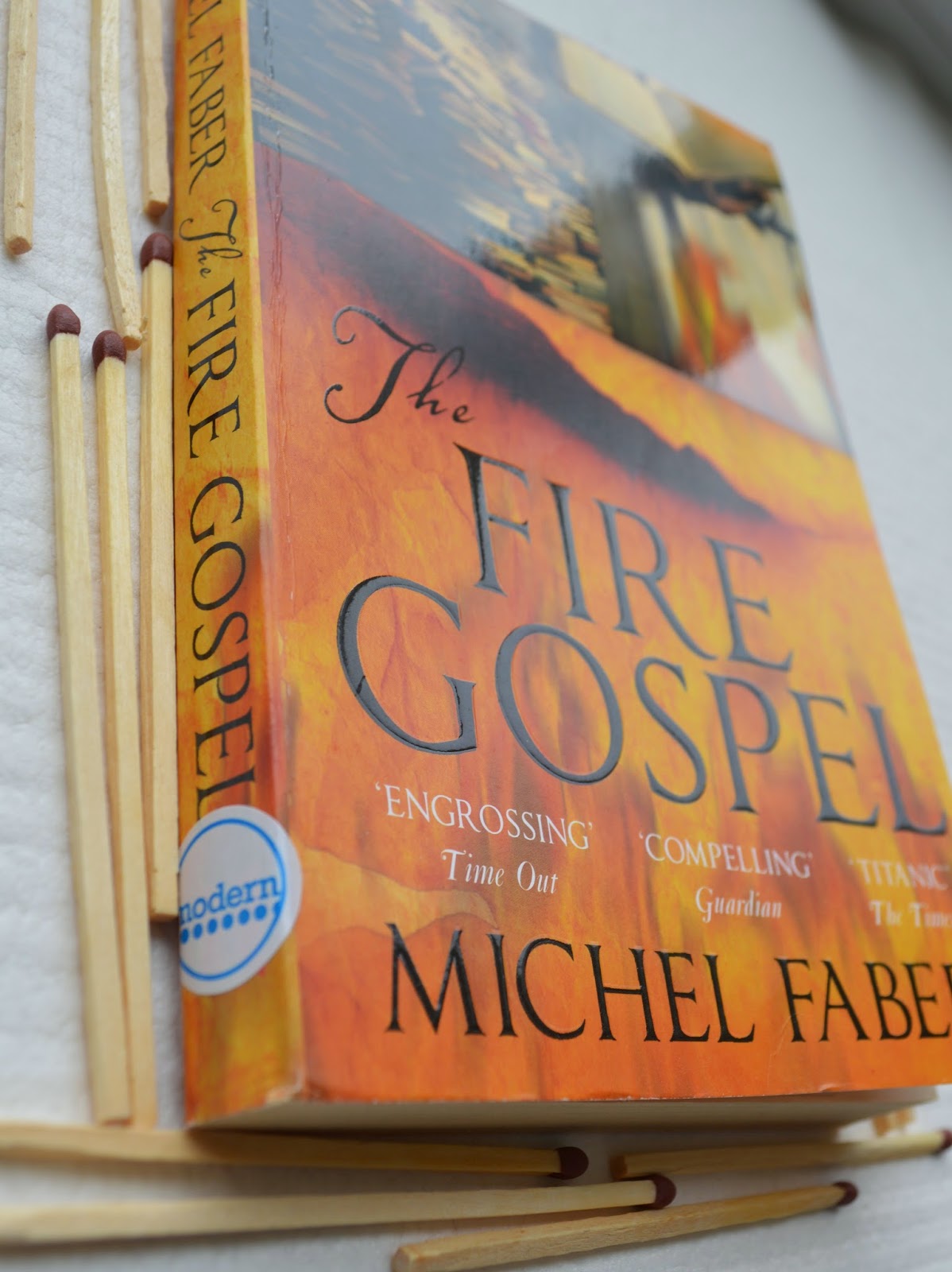 The Fire Gospel was definitely not a waste of a couple of hours, I found it amusing, but I think the concepts it explored could have been expanded on. It is short book, and the ending did feel abrupt. Michel Faber is a talented writer, The Crimson Petal and and The White is one of my favourite novels. The Fire Gospel, however I would be more hesitant to recommend, it is not a bad book, but it is not extraordinary either, it is ultimately rather forgettable.