I've been expanding my reading horizons recently, first with a Western  now with fantasy. Neil Gaiman's Neverwhere is all about an alternative London, LondonBelow a subterranean world full of monsters, personified tube stations and people who have fallen through the cracks.

Although this is the first of his book that I've read, Neil Gaiman is a publishing phenomenon who has won numerous awards. Neverwhere started life as a 90s tv show, but frustrated by the contrasts of this medium and the quality of the programme, Gaiman wrote the novel to expand the universe and retell the story. 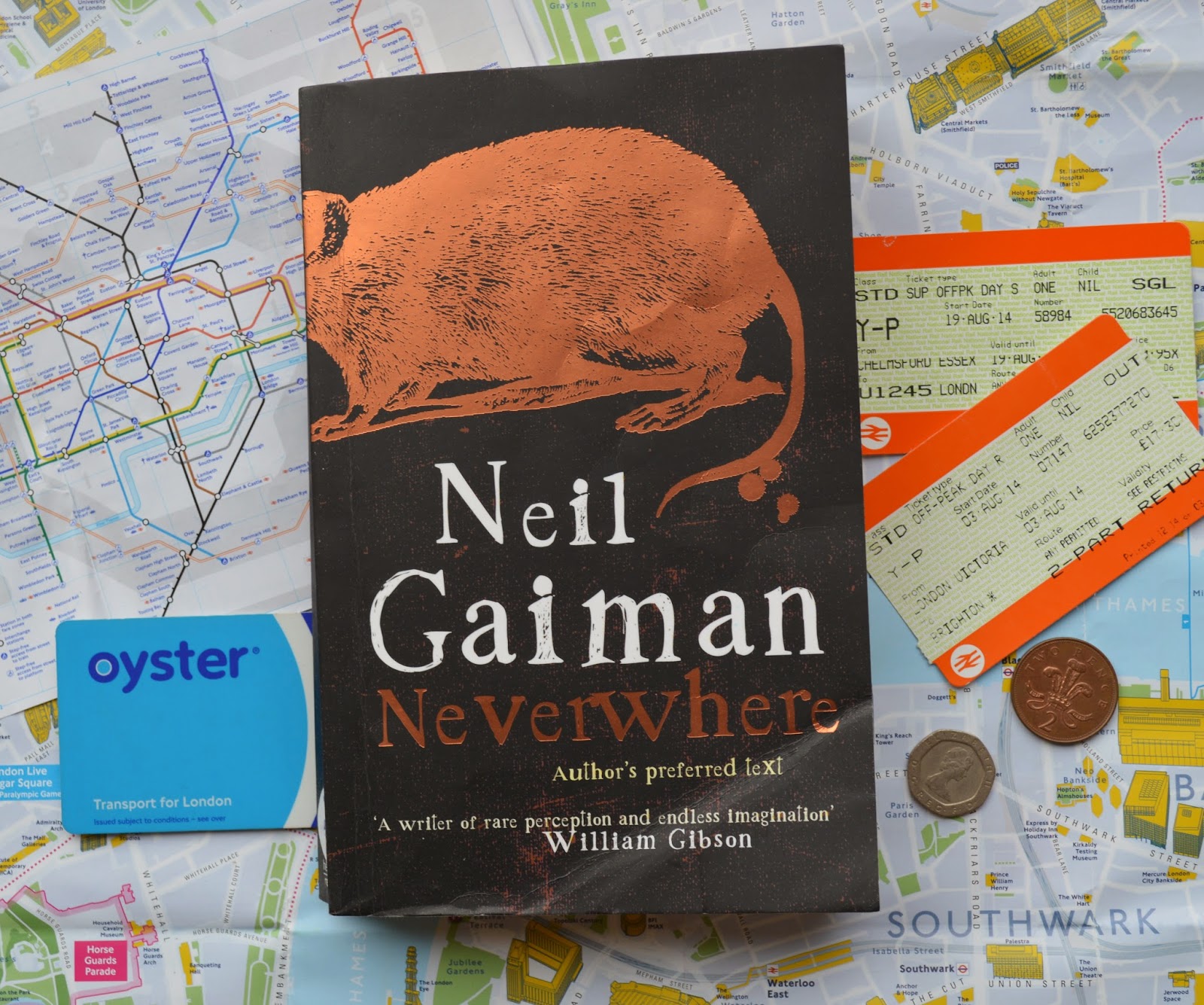 The Plot: When Richard Mayhew comes to the aid of a young woman huddled and bleeding on a London street, he is thrust into a perilous situation. Through his charitable act of kindness Richard aligns his fate with Door, who is running for her own life as well as trying to avenge to deaths of her family. Together, Richard, Door, Hunter and the foppish Marquis de Carabas navigate through the fantastical LondonBelow. They seek help from an angel called Islington, by first they must evade the sinister Mr Coup and Mr Vandemar and the other threats of the underground cit
Rating: 3/5
full review under the cut:-

There are some parts of the novel that I found very creative, in particular how the tube stops are re-imagined. Knightsbridge becomes 'nights bridge', a crossing of impenetrable darkness, filled with terrors, Blackfriars is home to monks and of course The Angel Islington is an actual angel named Islington. Rats and pigeons, notorious pests of London streets are also utilised, Master Longtail is revered, and the animals deliver messages and provide assistance. I do like it when magic is normalised and integrated with the mundane, anyone who grew up with Harry Potter will appreciate the marriage of the ordinary with the fantastical.

Where the book falls down, in my opinion, is having the story told from Richard's perspective. I get that the whole 'fish out of water' thing is useful for introducing an alternative reality, and can be played for laughs, but I didn't really warm to him. I was much more interested in Door and Hunter. Door is an extraordinary resilient lass with talent, as her name suggests she can open portals. Her whole family dies, and aside from a small cry, she just gets on with it. If the novel had been told from her point of view, I'd hope that more time would be spent on her grief, fears for her own safety and the burden of responsibility she has. In comparison to her, Richard is a bit of whinge, yeah he's having to adapt to LondonBelow, but Door found her whole family murdered. 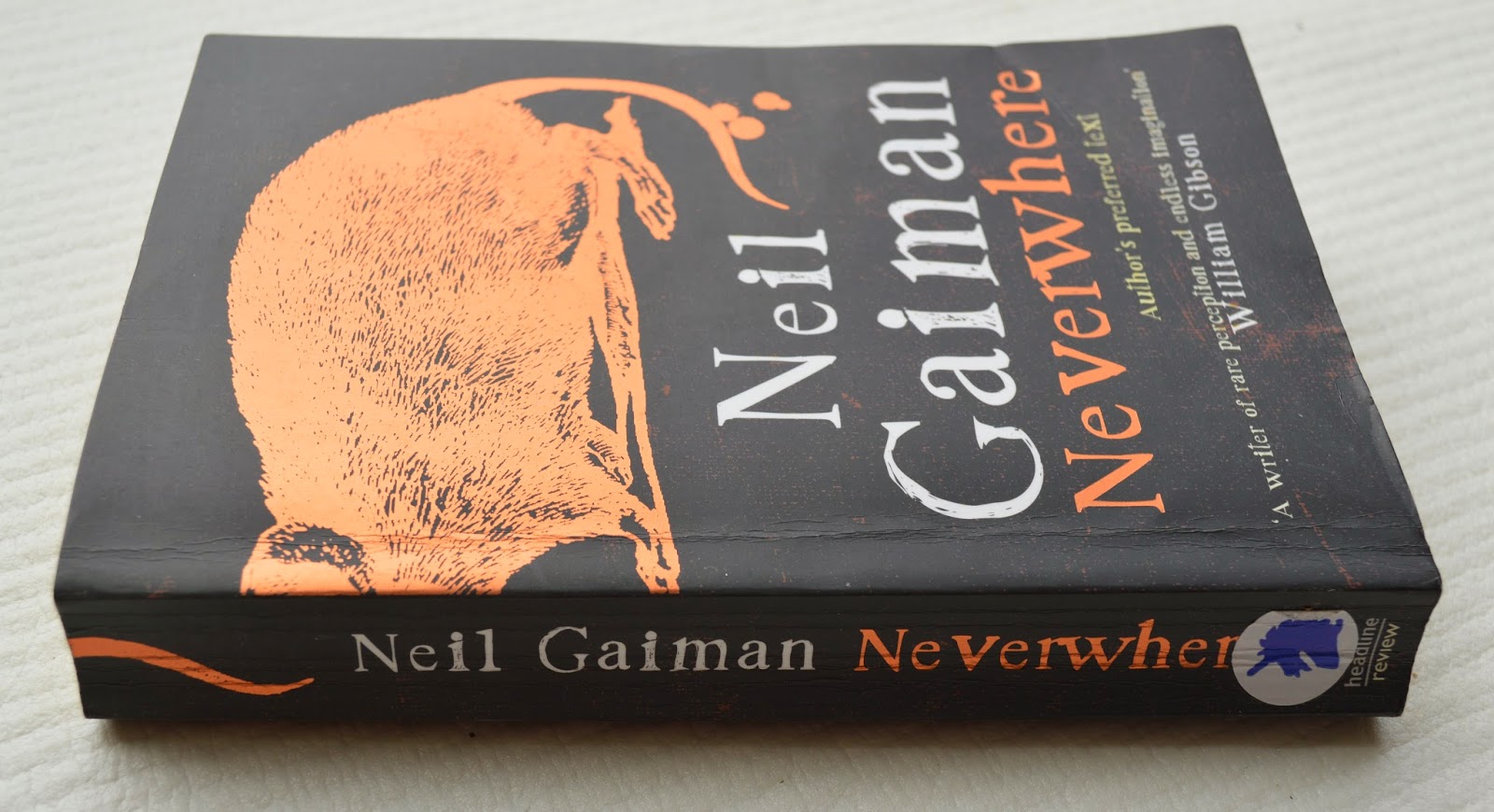 Another small flaw is that the surprising isn't very surprising, it is obvious quite early on who is behind the murders and who is controlling Mr Croup and Vandemar. I'm not going to spoil it for anyone, but if you do read Neverwhere I bet by page 200 you'll have sussed out who the big baddie is. I must say though, that this lack of surprise didn't ruin my enjoyment of the novel as a whole, and there is sufficient suspense that I wanted to race to the end.

As a whole I found Neverwhere to have plenty of potential, it has flashes of cleverness and imagination and could be enjoyed by a wider audience than just fantasy readers.
Email ThisBlogThis!Share to TwitterShare to FacebookShare to Pinterest
Labels: alternative reality, book, Britain, British Literature, fantasy, fiction, literature, London, Neil Gaiman, Neverwhere, paperback, review